Part of complete coverage on
Have Kids, Will Travel

Parents who shouldn't be allowed on planes 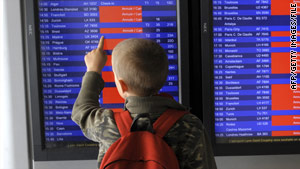 "The baby in the back row screamed bloody murder," he remembers. "Its mother did everything she could think of to quiet the baby. She actually was dripping with sweat because you could tell she worried about what it was doing to the other passengers. I think she had reason to worry, too, because there were some very sour fellow passengers."

The problem is as old as air travel itself: Adults seated next to misbehaving kids while confined to a pressurized aluminum tube. But it seemed like until now, at least, we knew whose side the parents were on. Like the mom on Meador's flight, they did everything they could to keep their offspring from driving the rest of the passengers quietly mad.

Today, you can't be so sure.

Take Pamela Root, who recently became the poster child for permissive parents after she and her 2-year-old son were kicked off a Southwest Airlines flight. Apparently the child's demands ("Go! Plane! Go!" and "I want Daddy!") were so loud that the other passengers couldn't hear the in-flight announcements. Southwest apologized for ejecting them and offered Root a $300 voucher, incurring the wrath of the commenting classes.

"Today's parents have a different view of children's behavior," says Renee Mosiman, a marriage and family therapist and co-author of "The Smarter Preschooler: Unlocking Your Child's Intellectual Potential." "Parents are more permissive, which can result in children who are more unruly in public, especially during plane travel."

I've given this some thought after an earlier column in which I wondered if children should be banned from flying. Halfway through the story, I conceded that no discussion of banning kids would be complete without the possibility of getting rid of bad parents, too.

I can't pretend to know what separates a good mom or dad from a bad one. But when it comes to air travel, there are a few telltale signs that you're dealing with parental incompetence. Here they are:

'My child can do no wrong'

There's a small group of parents who believe their kids walk on water. On the ground, they are free to indulge their offspring to their heart's content. But on a plane, it doesn't quite work.

Michael Liebmann, a legal secretary who lives in Atlanta, remembers flying from Tel Aviv to Rome, where he was seated next to a child, "who started screaming the moment we took off." After a while, he politely asked its mother to do something. "She yelled at me that her 'perfect child' could scream as much and as long as it wanted to," he says. "No amount of niceness was able to accomplish anything."

I have some experience with parents who turn a blind eye to their kids' shortcomings: I am related to a few of them. They shouldn't allow these kinds of parents to buy airline tickets -- regardless of their kids' ages.

'I don't care if my child misbehaves'

What's worse than parents who are oblivious to the annoying nature of their children? A parent who isn't.

Gary Zeune, a professional speaker based in Powell, Ohio, once sat between two toddlers -- one in the row behind him, the other in the row in front of him -- who performed an exquisite form of torture. "The kid in front was standing and let out a scream," he recalls. "The one behind me replied with a scream." After about six of these back-and-forth screams, it became clear to Zeune that the moms were unable to control their kids.

"Everyone was livid," he told me. So he stood up and ordered the children to be quiet. And after that, they were.

Parents who won't step up to the plate to control their kids ought to be shown the cabin door.

'I can't control my offspring'

This is the most benign version of incompetent parenting. I know, because I've been one in the past.

I thought I could keep my little ones (I have three) occupied on the plane. Then the doors closed and suddenly I was in charge of three wild children who refused to sit in their seats, demanded food and yelled at one another. After that, I grounded my family from flying for a while.

Nina Boal, a computer programmer who lives in Columbia, Maryland, remembers a flight from Tokyo to Detroit, where she was seated next to "an inconsolably screaming kid." "No matter what the parents did, the kid wouldn't stop screaming and crying," she says. "This was an 11-hour flight."

Parents who lose control of their offspring on a plane can be forgiven the first time it happens. But if they know they have a problem, and they continue flying, they're no better than the ones who can't, or won't, do anything about it.

Oh, one more thing: This is bound to get worse.

"Today's parents think that their little darlings have the right to scream, pound on the backs of chairs, hit passengers on the head and do whatever else amuses them," says psychiatrist Carole Lieberman.

"This comes from parents feeling entitled and being too distracted by their own fears, worries, computer work, movies, and so on. They think of the flight attendants as their own personal babysitters."

Airlines already blacklist passengers for all sorts of reasons, from bad behavior to breaking their ticket rules.

Perhaps they should add inept parents to the list.