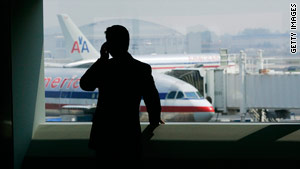 (Tribune Media Services) -- How do you know that the rules restricting electronics on planes are impractical? When you see a crewmember openly texting at 36,000 feet.

That's what Peter Zapalo says he saw on a recent Southwest Airlines flight from Philadelphia to Denver. On his way to the lavatory, Zapalo, an exercise physiologist from Philadelphia, spotted a crewmember who appeared to be messaging on his BlackBerry.

"I was maybe two feet from him and you could see his text, a response, and his reply," Zapalo said. "I'm sure passengers are sneaking around and doing this all the time, but c'mon -- the flight attendant?"

Zapalo wrote to Southwest expressing his concern and received a form letter thanking him for his message, followed a few weeks later by an explanation that the attendant must have been using a handheld device to "update alcohol sales."

The conflict between an always-on society and the rules on the use of in-flight electronics is hardly new. The Federal Communications Commission prohibits the use of cell phones while airborne. But passengers have refused to turn off their handsets on planes since there have been handsets. And with a rise in the number of wireless-enabled planes -- the largest provider of airborne communications, Gogo Inflight, offers hotspots on more than 700 commercial aircraft -- the problem appears to be taking off.

Asked about the texting flight attendant, a Southwest Airlines spokesman said that Zapalo hadn't necessarily seen the employee break the law. "Generally speaking, it is completely feasible for someone to text or e-mail while their device is in airplane mode," said Chris Mainz. "Therefore, they would not be transmitting any signals and still be within the guidelines of the FAA. The text or e-mail would not actually transmit until the phone is back on."

Janet Spencer, co-author of the book "Betty in the Sky With a Suitcase!" (Riverbend Publishing, 2010), a flight attendant's memoir, says the clashes between crewmembers and passengers happen constantly, for several reasons.

"First, more and more people are becoming more and more attached to their personal electronic devices and cell phones," she told me. "It is almost a physical extension of some people, like an electronic limb they can't be separated from."

Another reason passengers are fighting over their PDAs is that they're under more pressure than ever, she says. "Having to arrive so early, all the added security measures, the shoe removal, the liquid restrictions, and now full-body scans, have amped people up, irritating them every step of the way as they proceed on their trip," she said.

She's right. And I'm one of those strung-out air travelers, permanently tethered to my iPhone. On a recent flight from Dallas to Orlando, after the cabin doors closed, I couldn't help myself: I had to check e-mail one last time. My 5-year-old son, who had obediently powered down his video game when the attendants asked, gave me the look. A few moments later, I got the same look from a flight attendant. I reluctantly switched the phone off.

Dan Poynter, a Santa Barbara, California, book publisher and a frequent flier, sees countless passengers like me, who fire up their handsets on a plane when they aren't supposed to. He doesn't think it's a big deal. "To my knowledge, mobile phones have never interfered with navigation equipment on aircraft," he says. "But rules are rules."

Given the recent increase in disputes over electronic devices, and the likelihood that there will be even more in the years to come, what's the solution? Some say that revising the rules is the sensible fix, to account for the fact that turning off a phone is no longer realistic.

But in the meantime, passengers like Victoria Weisfeld, a health policy consultant from Princeton, New Jersey, wonder what to do if a gadget addict like me sits next to them on a plane. "Do I go back to sleep?" she asked. "Mildly reprimand you? Wait for the flight attendant to appear? Or slap the thing out of your hand and ask questions later?"

As a perpetrator of this cell phone crime, my vote's for "wait for the attendant."

Maybe Brian Searl has a better idea. As the chief executive of a video production company in Cleveland, he's encouraged his employees to go the other way when they board a plane. When someone is flying on business, company policy dictates that they not use an electronic device on a plane. At all.

"Mostly, this comes not as a result of airline policy but a desire to give our employees a break from the grind of business and to have them refreshed and ready to work upon arrival," he said.

As someone trying to kick the habit, I kind of like that rule.