A wilder way to vacation -- and sweat 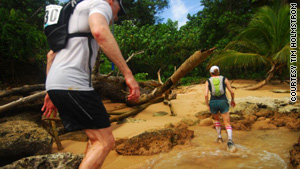 Adventure racing vacations, such as this one across remote jungle in Panama, are at their most popular.
STORY HIGHLIGHTS

(CNN) -- Rebecca Rusch was a long way from Idaho.

She had spent the night on the floor of a wooden shack and eaten, hungrily, a salty, starchy mound of cassava root. A family in a remote village of Borneo had taken her in, as they would any traveler who was obviously tired, dirty and starving.

Rusch, who lives in Ketchum, loves to travel. But she prefers to do it in a sweatier, more unconventional way. She's an adventure racer, a breed of athlete that thrives on racing across unpredictable, exotic regions of the world. Get from point A to point B, however you can: rappelling, running, hiking, climbing, kayaking. Just get there.

It was still dark when an old man in the village heard about Rusch and her teammates.

Competing in an epic, multiday race across the third-largest island in the world, they had no clue how to get to the next town on the course. The old man knew it well; his family lived there. He'd made that five-hour run so many times.

He found them when it was still dark, and motioned "follow me," lifting his torch. They put on their headlamps and set out behind him, barely able to keep up with his bare feet springing along pebbled, dirt paths.

"It was like a dream, watching him lead us all the way to this town," Rusch said. "That is traveling to me. That is really getting close to a culture, having an experience in a way you would never get to if you were a tourist taking the usual road."

A climbing instructor whose students turned her onto adventure racing, Rusch is now one of the few pros of the sport. What began as mostly a fringe endeavor by a few daring athletes in the 1960s, adventure racing became a pop culture phenomenon when reality TV bigwig Mark Burnett created "Eco-Challenge" in the mid-1990s.

Broadcast on major networks, including MTV and the Discovery Channel, between 1995 to 2006, the Emmy-winning show followed co-ed teams as they raced nonstop across 300-mile courses in locales such as Utah, Fiji, Maine, Morocco, British Columbia, Australia and New Zealand. The show ended when Discovery Channel didn't renew its contract.

Burnett went on to create "Survivor."

In 1998, there were 11 adventure races staged in the United States; in 2009, 194 races were held, according to the U.S. Adventure Racing Association. It sanctions events such as Grizzlyman, a 10-hour race across mountains in western Montana and a 44-mile rim-to-rim run in the Grand Canyon. USARA's website lists camps and races, many probably just a ZIP code away.

International adventure races don't have a formal ruling body, and they tend to be longer, tougher and pricier, if only by virtue of travel expenses.

It can cost $5,000 or more to do a 24-hour marathon to the summits of the three highest peaks in Wales, England and Scotland; 250 KM treks across the Sahara and Antarctica; or a four-staged bike tour across Costa Rica and a 600 km mountain bike race from Fernie, British Columbia, to Canmore, Alberta.

But there are affordable, equally exotic races, many held in Central and South America, including The Coastal Challenge Inca Run that traverses the Cordillera mountain range and goes through several tourist-free villages. Held this September in Bolivia, registration is $1,800, which includes hotel stays in Copacabana and Sorata. Another Coastal Challenge race in October, which is less expensive and covers meals and lodging, crosses Costa Rican volcanoes, rainforest and beaches.

"Most people look at those distances and instead of saying, 'Oh that's hard, they say, that's a vacation and I want to see if I can do that,' " said Clay Abney, the editor in chief of Adventure World Magazine, USARA's publication that tracks American races. "Look at how normal it is to do a marathon now."

More than 500,000 people attempted marathons in the U.S. last year. Even the world's toughest triathlon -- the Ironman -- is drawing weekend warriors who are willing to train hard enough to get through the 2.4-mile swim, 120-mile bike and 26.2-mile marathon.

"Just don't come into an adventure race counting on your aid stations, getting your nibbles at a certain time at a certain mile, pulling your bike to the side of the road if something goes wrong so someone can pick you up," said Robyn Benincasa, an Ironman veteran who has won Eco-Challenge twice and raced across every knurly spot on the globe. She, like Rusch, is typically the only woman on a team of men.

"I like to say that an Ironmaner is a poodle; adventure racers are Rottweilers," she said. "Physical ability is only a fraction of what you need [in an adventure race]. Attitude is everything," she said.

"You've got to be completely open about what you might encounter: people, animals," said Benincasa, who is also a full-time firefighter in San Diego.

"If a villager gives you a slice of boar with hair still on it, because they're being polite, you just have to go with it. God, I threw up for hours after eating that."

Puking is a minor hazard compared with the sport's very real dangers, she reminds.

For years, many have argued that international adventure events need to adopt formal staging rules. Racers do get injured, and in very rare cases, they have died.

In 2004, Australian racer Nigel Aylott died when he was hit by a falling boulder during Primal Quest, an extremely difficult 10-day race in Washington state. Eduardo Delgado Rosas died in 2005 during a long swim across a lake during the Extreme Adventure Hildago in Mexico.

In the Borneo Eco-Challenge in 2000, many competitors were sickened by a pathogen. No one died. Benincasa was among the ill.

Still, that was better than being on a cruise.

"When I think of most people's typical vacations, they seem like my nightmare. I'd rather stay home," she said. "I have no interest in going somewhere if I can't hike or paddle. Fun to me is getting out in the world and physically connecting with it. No beach towels for me."