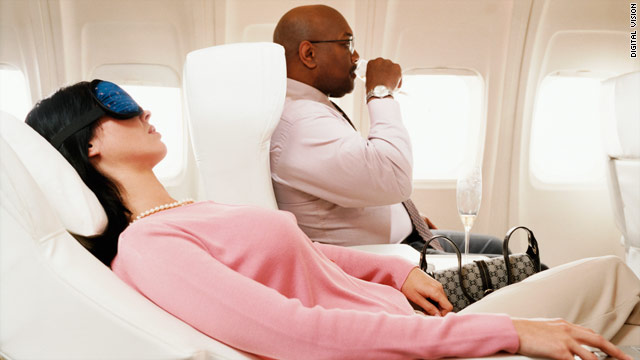 Some airlines have reputations so strong that passengers readily pay tens of thousands of dollars for a ticket.
STORY HIGHLIGHTS

(CNN) -- A whole industry caters to air travelers looking for the cheapest airfares, but that was the last thing Rob Cockerham wanted.

He was hunting for the most wallet-busting, credit-card maxing, extravagant plane tickets he could find.

Cockerham recently spent an evening calling a dozen airlines as part of his quest and found plenty of choices. How about $11,000 for a roundtrip flight in first-class from California to Johannesburg, South Africa?

Or almost $19,000 for a roundtrip journey from the West Coast to Sydney, Australia? And the ultimate budget buster: He was quoted more than $26,000 for a trip from California to London, England, and back.

"It was amazing. I kept thinking I could buy a car ... I could get a boat for that. I could take 40 trips for that amount of money," said Cockerham, who lives in Sacramento, California, and documented his findings in his blog, Cockeyed.com.

Cockerham's quest was an experiment -- he had no intention of buying any of the tickets -- but it uncovered a fascinating world of extreme airfares that few people can imagine, let alone afford.

You can see some of them for yourself: Plug some international destinations into any airline website, choose refundable first class as your cabin of choice and let the fun begin.

But does anyone ever actually book those fares?

Even if passengers do pay to sit in the front of the plane, most don't purchase full fare first class -- the most expensive option because it's fully refundable and has absolutely no restrictions, said George Hobica, president of Airfarewatchdog.com.

The difference can be striking. Hobica found one flight from New York to London in business class for about $2,000, but when he chose a refundable fare for the same seat, the price jumped to $5,000.

But there are some cases in which price doesn't matter. Major multinational corporations would pay extreme airfares if they had to, said Rick Seaney, the CEO of FareCompare.com. People could also be forced to pay exorbitant fares if they absolutely had to be on a particular flight and there were few seats left, he said.

In addition, a select few carriers in the world -- like Singapore Airlines, Qatar Airways and Emirates -- have reputations so strong that they can actually quote a price in the tens of thousands of dollars for a ticket "with a straight face" and get people to pay it, Howard said.

They also offer luxury that most travelers could only dream of, like private suites, multicourse meals created by acclaimed chefs and complimentary chauffeur-driven cars to and from the airport.

That still wouldn't be worth it for Cockerham, 41, who got the idea for his extreme airfare experiment after one of his friends traveled to India for a work assignment and flew in business class -- a ticket that cost $6,000 from California.

He was also amazed by the gulf between an airline's customers: For many, a $10 increase in a bag fee is cause enough for an uproar while a select group of others may readily plunk down $10,000 for a seat in first class.

But at those prices, wouldn't it make sense to rent a private jet?

If a flight is less than 2,000 miles, the ultrawealthy will fly private, Howard said. Transoceanic travel, however, is so enormously expensive using this option -- as much as $200,000 -- that paying $25,000 for a ticket on an ultraluxurious airline makes more financial sense by comparison.

For some people, it may also be a chance to show off a bit while traveling in style.

"You have certain types of celebrities that are very private, and some like John Travolta, who flies his own plane. Then on the flip side, you have ones that wouldn't mind being seen," Seaney said.

Still, Cockerham couldn't imagine paying those kinds of prices, even if he were a millionaire.

"I think I would have to have some really bad experiences in coach first," he said.