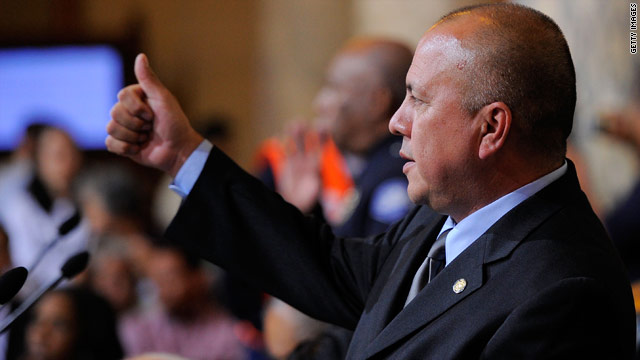 City council member Ed Reyes gives a thumbs up to supporters after the resolution was approved.
STORY HIGHLIGHTS
RELATED TOPICS

(CNN) -- The Los Angeles City Council overwhelmingly approved a boycott of Arizona-based businesses and governments Wednesday unless the state repeals a new law giving police the power to question a detainee's immigration status.

The Arizona law requires immigrants to carry their registration documents at all times and allows police to question individuals' immigration status in the process of enforcing any other law or ordinance.

The Los Angeles resolution passed Wednesday said Arizona's new immigration law "encourages racial profiling and violates Fourteenth Amendment guarantees of due process and equal protection for U.S. citizens, legal residents and visitors who are detained for suspicion of being in the country unlawfully."

The city's Harbor Department, which has $26 million of such contracts, is opposing the resolution, the report said. This includes money for the "Clean Truck Program," it said.

"The Harbor does not recommend rescinding this incentive program due to adverse effects this action would have on the environment and public health," the analyst wrote.

The resolution also prohibits city employees from traveling to Arizona "unless special circumstances can be demonstrated" that canceling a trip would "harm city interests."

The National Council of La Raza announced a boycott last week against Arizona's $18.6 billion tourism industry because of the new law, and called on other groups to join. Nearly 30 organizations have come on board, including the Rev. Al Sharpton's National Action Network, People for the American Way, the Japanese American Citizens League and the Service Employees International Union.