Q&A: Who gets to fly first? 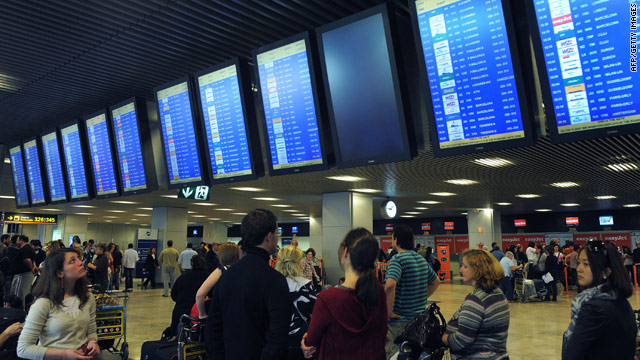 Experts say it could be weeks before the backlog is fully cleared.
STORY HIGHLIGHTS
RELATED TOPICS

(CNN) -- With more flights beginning to take off on schedule, airlines are attempting to clear the backlog of passengers who have been waiting for days because of the volcanic ash cloud over Europe.

But with tens of thousands waiting to travel, there are questions over who gets to go first and how long the delays will last.

How are airlines prioritizing ticket allocation?
Other than a few special cases, most airlines are prioritizing those with pre-existing tickets for scheduled flights. In some cases, empty seats on these are being filled by customers with urgent travel needs. Hong Kong carrier Cathay Pacific says it is giving priority to unaccompanied minors and students heading back to the UK to sit exams. Singapore Airlines is fast tracking those with "special needs," the elderly and those with infants or young children. Rochelle Turner, head of vacation research for consumer watchdog Which?, says any prioritizing is at the discretion of individual flight operators. "The elderly, the sick, frequent flyers -- it's entirely up to the airline who goes first."

Do I need to do anything if I have a ticket on a scheduled flight?
All airlines are advising customers to double check whether flights are going ahead before heading to airports. British Airways is even urging customers with tickets on scheduled departures to consider delaying their travel plans to free up space on planes to allow delayed passengers to travel. In most cases, passengers who hold tickets for a flight due to take off as scheduled should be fine. Says Turner, it is still advisable to call the airline to confirm or check-in online.

Video: Working to clear the backlog

What if my flight was cancelled?
All airlines are asking passengers whose flights were canceled to rebook, preferably by telephone or online. Beyond special cases, some airlines are prioritizing rebookings for those whose whose original tickets have the earliest dates -- some have set up special rebooking phone numbers to facilitate this. For those who have made alternative plans, many airlines are offering full refunds for unused tickets.

How long will it be before everything's back to normal?
Provided there are no further setbacks caused by volcanic eruptions or other factors, experts estimate the bulk of the backlog will take anywhere between a week and 10 days to clear, but residual problems may persist for weeks. Cathay Pacific, for instance, says it has 16,000 passengers waiting to fly and has drafted in 50 staff to help reallocate their tickets. On Wednesday it said the first flights currently available for new bookings are May 5.

What about passengers stuck in Madrid?
Confusion over advice given to British travelers stranded in mainland Europe resulted in hundreds converging on the Spanish capital Madrid in anticipation of being provided with overland transport to the English Channel ports. The UK Foreign Office had said it was using Madrid as a transport hub for those arriving from outside Europe, but faced complaints when other stranded passengers arrived in the city expecting help. The Foreign Office on Wednesday urged UK citizens to avoid traveling to Madrid. It said it now had 150 coaches in and around Madrid, but it remains unclear whether they will be used as flights resume. "We are still assessing the situation," a spokeswoman said.

What about the situation at Calais and other Channel ports?
For other British air travelers stuck in Europe, the Foreign Office says they should contact airlines but advised there is now no congestion at English Channel ports after ferry operators boosted capacity for foot passengers. Long lines continue to be seen at ferry ticket offices though, and some passengers report that online bookings offer cheaper tickets than those bought at the port. Ferry operators say they have raised prices, saying the charge is justified by increased staffing costs.

Will stranded passengers be entitled to compensation?
Passengers on non EU flights are entitled to a rebooked flight, but the airline is not under obligation to offer meals, accommodation or any other compensation. Anyone flying with an EU-based carried or on a flight originating in the EU is entitled to certain rights, including accommodation and meals -- but not additional cash compensation. Turner warns that passengers who choose not to wait for their airline to rearrange transport and make their own arrangements will forfeit rights to certain assistance. Less clear-cut is the entitlement to compensation through travel insurance. Some insurers insist they are not liable since the volcano eruption can be categorized as an "act of God." Others indicate they may be more sympathetic.