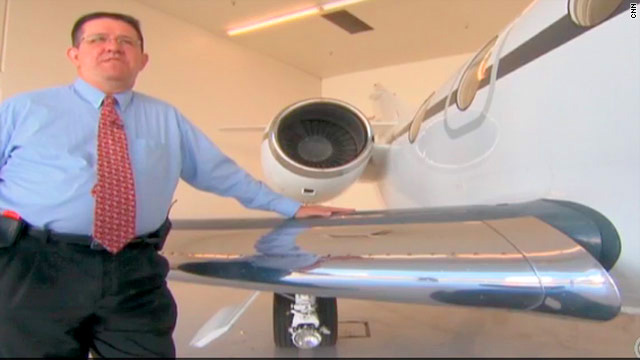 Las Vegas, Nevada (CNN) -- Two years ago, in perhaps the hardest decision of his life, an Oklahoma charter jet pilot stopped flying because he was suffering from depression. Embarrassed, he kept the reasons for leaving his career hidden from all but his closest confidants.

But in a spark of defiance, the pilot videotaped a tragicomic video about his plight.

Donning a paper sack over his head and speaking in a deep Darth Vader-like voice, he intoned: "I am the Prozac Pilot. I am forced by society to hide my face in shame and [am] pushed out of my chosen profession by FAA regulations."

He chose to seek help.

"When I grounded myself, it was like cutting off my arm," he said.

But over time, his emotional tailspin leveled off with medication. And this month, it changed for the better when a friend called with unexpected news: The Federal Aviation Administration was changing its policy prohibiting pilots from taking antidepressants.

So today, the Prozac Pilot is "coming out of the hangar," he joked.

Meet Collin Hughes, a one-time rodeo cowboy turned jet pilot turned fledgling insurance agent, whose hope of returning to the sky has been reinvigorated by the new FAA policy. And who now hopes his story will embolden other pilots to address their depression.

"It's like life is returning to me," Hughes said. "It's amazing."

Of the FAA's many policies, few were more stringent than those governing the use of antidepressants.

Pilots who revealed that they had mental disorders or suicidal thoughts were almost certain to fail their medical exams, a requirement to continue flying. All antidepressants were forbidden.

Consequently, few pilots acknowledged being depressed, authorities say. To admit depression was not only a career ender, it was a breach of the pilot's "right stuff" code.

"It's a stigma," Hughes said. "In aviation, to tell your friends or other pilots [about your depression] ... it's just not done."

Hughes thinks his depression is partly the result of his past as an abused child. He says he never recognized that his feelings of darkness and despair were abnormal, believing everyone shared those feelings. But his wife, Jeanmarie, a clinical social worker who had done her master's thesis on depression, recognized the signs in her new husband.

"I could see it all over his face," she said.

In 2008, with the economy entering a downturn, Hughes was laid off from his charter jet job. He landed a job interview in Texas. But before traveling there, Hughes and his wife decided that his deepening depression deserved attention, and she persuaded him to seek treatment.

"It wasn't something we did lightly," Jeanmarie Hughes said. Among other things, it meant Jeanmarie, who worked part-time, would have to work full-time.

Hughes was tempted to continue flying. "I kept saying, 'Honey, I don't have to report this.' And she, being the most spiritually strong one, says, 'You know that it's just not right,' " he said.

Making the decision even harder was the knowledge that Hughes loved flying and was happy in the sky.

"Flying itself is like an antidepressant," his wife said. Not flying could be a step backward, they feared.

"When I took that first antidepressant, I knew [my flying career] was over, because I knew the regulations," Collin Hughes said.

Hughes started an anonymous blog, Pilots with Depression, to document his case and connect to people in similar situations.

He wrote of his love of flying, his desire to keep his identity "as low key as possible" and the impact of his treatment.

"It gets worse before it gets better," he wrote of the early months. "I sat around the house for several weeks doing nothing and feeling sorry for myself."

He described suffering dizziness and other side effects of the medication as his doctor worked to determine the correct dosage.

"If you are a pilot who is grounded due to medications, I say, 'Hang in there, brothers and sisters, you are not alone,' " he wrote.

Early in his treatment, he decided to create the "Prozac Pilot" segment, he says, for both dramatic and comedic effect. (Though he did not take Prozac, he also chose the name for effect.)

"I know the sack on the head is a bit strange," he wrote, "but it is supposed to add to the fun of these videos."

No longer tied to Oklahoma for his job, the couple moved to Las Vegas, Nevada, to be close to family, and Collin Hughes started learning the insurance business, specializing in aviation insurance so he could be near airports and planes.

But his treatment, he says, ultimately has been effective.

Under the new FAA policy, pilots with mild to moderate depression will be allowed to fly while taking antidepressants if they can demonstrate that they have been satisfactorily treated for at least 12 months.

The FAA also launched a six-month amnesty period during which pilots on antidepressants can step forward without fear of penalties. The pilots will be grounded until they can demonstrate that they have met the new requirements.

The FAA will, on a case-by-case basis, issue special medical certificates to pilots who take one of four antidepressants: fluoxetine (Prozac), sertraline (Zoloft), citalopram (Celexa) or escitalopram (Lexapro). Other drugs will be considered over time.

Dr. Thomas Byer, an FAA-certified medical examiner in Las Vegas, believes that the policy will allow pilots to be treated appropriately and safely.

"It's not like you take a pill and we see you five years later," he said. "We follow you very closely.

"If the medication is used appropriately, it's very safe, with relatively few side effects," he said.

The FAA said few pilots have stepped forward in the two weeks since the policy change was announced. Pilots probably are seeking guidance from their personal physicians and professional organizations before taking action, an FAA spokeswoman said.

Pilot groups say they have been receiving inquiries.

"There does not appear to be much middle ground among the comments," Dancy said.

"The concern that we have today is, we have people who are either self-medicating or not seeking a diagnosis. Either of those is unacceptable," Babbitt said. "This change ... will allow those people to get the treatment, allow us to monitor and return them to the cockpit [as] safer, better pilots."

"Prozac Pilot" Collin Hughes says he is not certain the FAA will return him to flying status. The new policy is untested. The devil could be in the details.

But he is hopeful and is looking skyward. Regardless of what happens, he is encouraging other depressed pilots to seek treatment.

"It will be ... extremely difficult," Hughes said. "But is it worth it? Yes. For anybody who's faced with this decision, don't hesitate."

He points to a line in his blog: "If I never fly again, I will probably miss doing what I love. However, when the meds are working, I never miss the darkness."