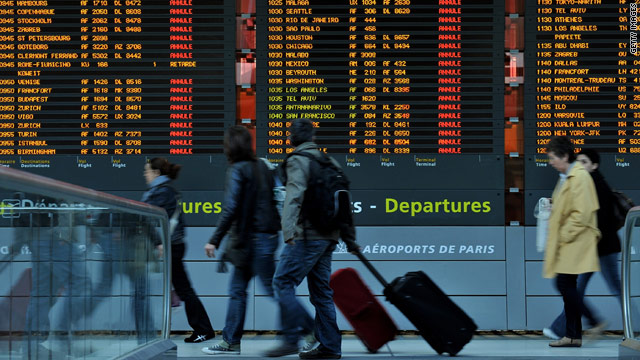 The volcanic ash has created traffic delays from Denmark to France, above.
STORY HIGHLIGHTS
RELATED TOPICS

(CNN) -- Here are the latest highlights regarding problems for air travel caused by the volcanic eruption in Iceland:

-- Australian airline Qantas canceled all flights Saturday to and from London, England, and Frankfurt, Germany, its only two European destinations. Further cancellations are likely, the airline said.

-- The Icelandic volcano whose ash is creating the disruption was still erupting Saturday, according to an official with Iceland's Department of Civil Protection and Emergency Management. He said it was not clear when the eruption will end.

-- Airspace restrictions over the United Kingdom have been extended until 7 p.m. (2 p.m. ET) Saturday, the British air traffic control service NATS said. Restrictions to Scottish airspace have also been extended, it said.

-- British Airways canceled all flights to and from London for Saturday. Several flights from North America scheduled to arrive at British destinations Friday night will go to Scottish airports instead, the airline said.

-- Irish budget carrier Ryanair canceled all flights to northern European destinations and Milan, Italy, until Monday because of the volcanic ash, the airline said.

-- According to the Air Transport Association of America, U.S. carriers cancelled approximately 280 flights Friday between the United States and volcano-affected areas in Europe.

-- The United Kingdom's National Air Traffic Service announced that airspace restrictions over the UK will remain in place until at least 1:00 p.m Saturday (8:00 a.m. ET).

-- Warsaw and Krakow airports in Poland were closed, affecting plans for world leaders to attend the Sunday funeral of Polish President Lech Kaczynski. Polish Foreign Minister Radoslaw Sikorsky said the services "will not be postponed, but they will be affected."

-- The volcanic ash cloud is expected to drift farther south and eastward through Europe on Friday night, Eurocontrol said. "It is reasonable to assume that there will be some significant disruption to European air traffic tomorrow," Deputy Head Brian Flynn told reporters.

• According to the Air Transport Association of America, U.S. carriers have canceled 196 flights so far on Friday between the United States and volcano-affected areas in Europe.

• British Airways is flying a number of flights from North America to Scotland overnight.

• Ryanair has decided to cancel all scheduled flights to and from the United Kingdom, Ireland, Denmark, Finland, Norway, Sweden, Belgium, Holland, northern France, northern Germany, Poland and the Baltic states into Monday.

• IATA's initial and conservative estimate of the financial impact on airlines is in excess of $200 million per day in lost revenues. The group is an international trade body created more than 60 years ago by a group of airlines.

• The Swedish airspace authority LFV said almost all Swedish airspace will close again. Only the country's two most northern airports, Lulea and Kiruna, will be able to have limited air traffic, and these restrictions will most likely remain in place throughout the weekend, LFV said.

• The volcanic ash cloud is expected to drift farther south and eastward through Europe on Friday night, Eurocontrol said. "It is reasonable to assume that there will be some significant disruption to European air traffic tomorrow," Deputy Head Brian Flynn told reporters.

• The Spanish airport authority said 617 fights have been canceled and 40 percent of the scheduled 1,600 flights between Spain and northern Europe are affected by the volcanic ash.

• Medevac flights out of Afghanistan and Iraq are being rerouted from their usual landing point at Ramstein Air Base in Germany, where flight operations are shut down due to the volcano in Iceland, U.S. military officials said.

• Britain's Health Protection Agency and an environmental consultant say there are few risks to human health from the ash in Europe. Any risks are likely to be minor, they say.

• If the airspace closures continue for as long as three days, some 6 million passengers will be affected, the Centre for Asia Pacific Aviation estimated Friday. Those passengers may also not be able to make claims on travel insurance because the volcano's impact may be classified as an act of God, the center said.

• Though Paris airports remain closed, landings only are being allowed at Charles de Gaulle, Orly and Le Bourget airports between noon and 4 p.m. (6 and 10 a.m. ET), according to DGAC, the civil aviation authority.

• Norway has partially reopened its airspace to allow flights at Vaernes and Stokmarknes, in the central and northern parts of the country, respectively, the Avinor air authority announced. Passenger travel to those areas will be limited with priority going to emergency flights, the authority said.

• About 17,000 flights will be canceled Friday in European airspace because of the volcanic ash, according to Eurocontrol, the intergovernmental body that manages European air travel.

• The closure of UK airspace has been extended to 1 a.m. Saturday (8 p.m. ET Friday), Britain's air traffic authority, NATS, said. Select flights are being allowed in Northern Ireland and Scotland, and some North Atlantic traffic may be allowed to those areas, it said.