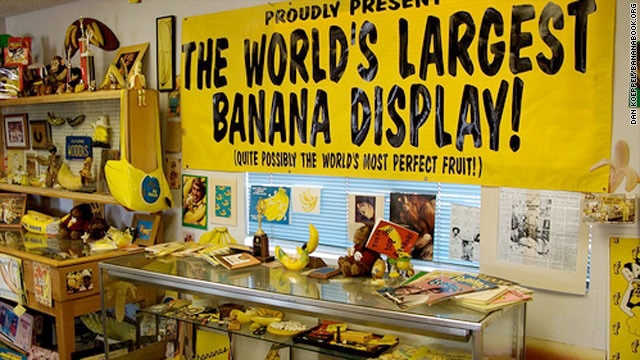 If you're bananas about bananas, this is the place for you.
STORY HIGHLIGHTS
RELATED TOPICS

Strictly speaking, they bought the contents of a former banana museum: the 17,000 banana-related objects Ken Bannister has accumulated since the early 1970s. For the past five years, Bannister had been sharing his collection with the world at his International Banana Club and Museum in Hesperia, California.

Three months ago, though, the Hesperia Park and Recreation District decided that the city-owned space housing the museum could be put to better use. The self-proclaimed "top banana" was given his walking papers.

News outlets around the country picked up the story of Bannister's plight, detailing his failed attempts to auction off the collection on eBay. The Garbutts, who own a liquor store in the California desert town of North Shore, on the edge of the horribly polluted Salton Sea, heard the story, and decided a banana museum was just the thing to turn their little shop into a tourist attraction.

They hope it will become "one of the must-stop-and-see sights on Route 111," Fred Garbutt told a reporter for AOL News.

Can a banana museum bring in the crowds? The plethora of museums devoted to fruits, vegetables and other foods makes clear that the idea certainly isn't a new one.

The article cites the National Apple Museum of Biglerville, Pennsylvania, which displays, among other things, a collection of vintage apple-themed sheet music. Our neighbors to the north have the Apple Capital Museum of Berwick, Nova Scotia, which holds weekly barbecues (rain or shine!), while Down Under, there's the Huon Apple and Heritage Museum in Tasmania.

Cranberry fans get to choose between the Wisconsin Cranberry Discovery Center in Warren and Pacific Coast Cranberry Research Foundation Museum and Gift Shop in Long Beach, Washington. ("A hidden gem," says the Daily Astorian about the latter. It also has a Facebook page.)

One must head to Asia for more exotic museological adventures -- perhaps the Pineapple Museum in Jalan Johor, Malaysia or the Watermelon Museum (home to 170 species) in Daxing, China.

Japan, it seems, is the world capital of fruit museums. You could tour the country going from the Plum Museum of Minabe (the building is shaped like a plum-pickling cask) to Tottori's Pear Museum to Sagae's Cherry Museum.

The curvaceous glass and steel Museum of Fruit, designed by celebrated architect Itsuko Hasegawa, is the crown jewel of Yamanashi's Fruit Park. (It inspired an atmospheric album by English experimental musician David Toop.)

The tomato (properly considered a fruit) has had a bit of a tough time, museum-wise. The Guernsey Tomato Museum, in the British Channel Islands, opened in 1974, serving homemade tomato wine to visitors. It receives less than stellar reviews on the Internet ("...the feebleness of the displays, the battered, uninformative signs purporting to enlighten the public on the practicalities of tomato-growing, the general dirt, the ill-kept greenhouses"), and now the Guernsey Museum's Web site does not even list it. (Perhaps the nearby Telephone Museum has siphoned off visitors.)

The Museo del Pomodoro, in Parma, Italy, is expected to open later this year, and will likely take up some of the slack. It's part of a complex of food museums dedicated to prosciutto, salami, and parmagiano reggiano cheese.

Visitors to the Idaho Potato Museum get a box of hash browns with admission; the online-only Potato Museum doesn't offer snacks, but has plenty of information. "The Potato Museum is not a product of the potato industry," it promises. The World Carrot Museum also lives solely on the Internet, unlike the Cucumber Museum, only an hour south of Berlin.

The Vidalia Onion Museum is currently undergoing renovations, but visitors to Georgia can always swing by the World of Coca-Cola in Atlanta, probably the most extravagant culinary museum in the world. It features animatronics, a "4D" film (smells are involved), and tastes of Coke variations from around the world.

The Spam Museum, at Hormel headquarters in Austin, Minnesota is, unsurprisingly, a lot more low-key. The Web site promises a World War II exhibit and a game show quiz: "the Spam knowledge that you will gain is priceless." You can also try your skill as a Spam canner in a mock assembly line. Clearly, an experience to cherish.

But not all food museums are about corporate promotion or agricultural boosterism. There are still some, like Ken Bannister's Banana Museum, that are inspired by odd, personal obsessions.

Sadly, Connecticut's Nut Museum is in limbo after the 2007 death of founder and ceaseless nut promoter Elizabeth Tashjian. But Barry Levenson, who started the Mustard Museum of Mount Horeb, Wisconsin is going strong. In 1986, he decided to amass the world's largest collection of mustard; he currently has more than 4,000 jars and a successful tourist attraction.

Lawrence Diggs is similarly passionate about vinegar, and he has put the tiny town of Roslyn, South Dakota on the map with his Vinegar Museum.

And then there's Ann Mitchell Lovell. She has set aside part of the antique shop she runs in Auburn, Washington and branded it the Washington Banana Museum.

Maybe Ken Bannister's collection will find a new home after all.

The Garbutts should watch their backs.