Airline fees: Where will they pop up next? 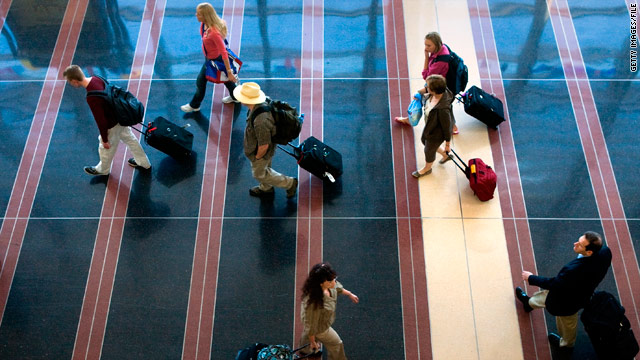 Airlines are creative with fees and new ones are likely, analysts say.
STORY HIGHLIGHTS
RELATED TOPICS

(CNN) -- Traveler outrage grows with each new airline fee, and this week's air travel chatter has fliers wondering how many more ways the airlines can devise to nickel and dime passengers.

Discount carrier Spirit Airlines announced Tuesday that it would charge passengers for carry-on luggage stowed in overhead bins. European low-cost airline Ryanair has generated buzz with an article in its in-flight magazine outlining a toilet fee on flights of an hour or less, a proposal introduced last year that many industry watchers considered a clever public relations stunt.

Passengers don't seem to be amused, although Ryanair's toilet tax has generated plenty of sarcastic potty humor among CNN.com readers. But in all seriousness, some travelers say certain amenities should be included in the fare.

"There are basic necessities that are expected on flights -- air to breathe, a seat and a rest room. I think it's ridiculous to charge passengers to use the toilet," one CNN.com user wrote.

Although major American carriers are unlikely to charge for admission to the restroom, airlines will continue to push the fee envelope, said Michael Boyd of Boyd Group International, a Colorado-based aviation consulting firm.

Just because he can't think of many more possible fees doesn't mean the airlines won't come up with something, he said.

"They're very creative. They're like squirrels. They'll get to the bird feeder somehow," Boyd said.

Airline consultant Robert Mann of R.W. Mann & Co. expects the carry-on and possible toilet fee to remain firmly in the realm of the aggressive discount carriers, who capitalize on "an infinite demand for very low fares."

"A lot of people will put up with a lot of inconvenience and crazy fees in order to think they got a low fare," Mann said.

Spirit Airlines led the way in charging for checked bags, and the legacy airlines followed.

"That was shocking to us at the time. This feels shocking now, but it's again Spirit setting a precedent, so who's to say the other airlines won't start doing it?" Banas asked.

The idea of carry-on fees angers many air travelers, but some are in favor of thinning out the stampede to board and the scramble to stuff carry-on luggage into limited overhead space.

"I, for one, am glad for this. I'm sick of people taking all their luggage onto the plane that clearly is too large for overhead bins, leaving no room for the rest of us," said Alexis Thompson, an insurance agent from San Diego, California.

Less than 10 percent of 1,750 respondents to an informal TripAdvisor poll said they would be willing to pay for carry-on luggage.

Banas doesn't think other airlines would charge as much as Spirit's $30 or $45 carry-on fees. She also expects airlines to implement fees for travelers who wait to check themselves in at the airport rather than doing it online.

And in addition to the now-standard checked-bag fees, travelers are likely to pay higher fuel surcharges this summer, Mann said. Boyd agrees that if oil prices continue to rise, fuel surcharges -- which he deems "a valid fee" -- will follow.

Paying for preference, whether it's for early boarding or more legroom, is another area where fees are likely to flourish, Mann said.

Consumer rancor over fees and the up-front disclosure of the final price of flying from one place to another has reached Congress in the form of an amendment to the FAA Reauthorization Act. Lawmakers and consumer advocates will have to hash out wording and the terms of the final bill before implications for airline customers are clear.

Boyd said the legislation would only further tangle a complex and anxiety-inducing web of airline surcharges.

"With or without [legislation], the airline industry should be a whole lot more transparent. Now it's hard to do because the airlines have different rules, but that doesn't change the fact that right up front, they should be saying, 'this is what you're going to pay,' " Boyd said.

Even if a law forced airlines to disclose fees before the point of purchase, the cost and time needed to overhaul current reservation and inventory technology, especially in the distribution systems used by travel agents, would mean a significant lag in implementation and objections from carriers who already are investing in overhauls to systems designed in the 1960s and '70s, Mann said.

"Part of the problem is that there's no standardization in these fees, in the manner in which they're triggered or in their level, Mann said.

So where is pricing headed? Mann predicts air passengers will be charged on the cargo model someday.

"We're eventually going to come down to essentially charging by weight and volume, which is the way cargo airlines charge. The only guys that are consistently profitable flying things around are FedEx and UPS."