By Heather Hansen and Kimberly Lisagor 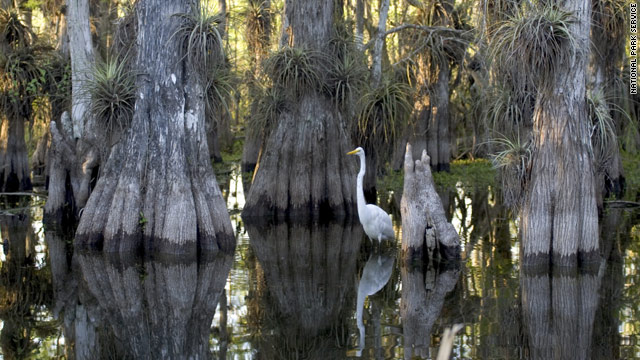 (Coastal Living) -- Heather Hansen and Kimberly Lisagor, authors of "Disappearing Destinations," have traveled the world investigating coastal sites that are as stunning as they are endangered. Here, they share advice for planning an eco-sensitive trip -- and how you can help.

Why go? Much of the storied Inside Passage route between Washington and Alaska looks as it has for centuries. At water level, you're privy to evergreen forests on the shoreline, orcas blasting plumes of water into the air, and striated glaciers with jagged bluish peaks that crash at the melting edges.

Why care? Unfortunately, visiting cruise ships trail a hazardous mess in their wake. On a typical weeklong journey, passengers produce sewage, gray water, and many tons of trash -- and a disturbing amount of it is dumped at sea. The disposal laws are much stricter in the United States, which means Canadian waters likely bear the brunt of the toxic load.

Plan your trip: The B.C. coastline is at its sunniest May through September. With an eco-friendly, small ship company like AdventureSmith Explorations (adventuresmithexplorations.com), you'll have access to narrow nooks where the big ships can't fit.

How to help: Check out Friends of the Earth (foe.org) to learn about efforts to help regulation and enforcement.

Why go? The Outer Banks includes vast beaches, salt marshes, and maritime forests of loblolly pines and live oaks. Waves sculpt the shoreline, and huge dunes migrate in the wind. Over time, says East Carolina University geologist Stan Riggs, the Outer Banks land has formed and collapsed and formed again. Humans try to preserve the roads, bridges, homes, and businesses from the unstable environment, but "protecting" the barrier islands with sandbags and jetties has worsened erosion and starved the shores of sediment.

Why care? If the water level increases by 2 feet, which the Intergovernmental Panel on Climate Change predicts it could by 2100, the Outer Banks may disintegrate.

Why care? Erosion is a common problem on developed coasts worldwide, but it is particularly acute on Oahu, where scientists estimate that sea walls have destroyed or significantly reduced 25 percent of the island's beaches over the past century. But there's hope, says Dolan Eversole, a coastal geologist at the University of Hawaii Sea Grant. Local governments have increased the minimum distance allowed between new buildings and the shoreline, and there is a trend toward public land acquisition.

Plan your trip: You'll find the mildest weather and lowest rates in the spring and fall off-seasons. The Hawaii Ecotourism Association (www.hawaiiecotourism.org) is an excellent place to start your search for environmentally responsible accommodations and outfitters.

Why go? From the cockpit of a kayak plying the ripples between the 222 islands off Portland, Maine, you can watch gannets plunge their big blue beaks below the water's surface. Flocks of eider ducks soar overhead, and harbor seals play in the quiet coves of fern-draped, rocky island shorelines.

Why care? Population growth has had some unintended environmental consequences -- among them, nitrogen pollution. When contaminated runoff enters the bay, patches of slimy green muck cover previously healthy beaches. Nitrogen pollution has already ravaged other bays worldwide, but Casco Bay is just beginning to see the effects.

"We don't want to get to the point where we can't turn it around," says Portland native Joe Payne, the Casco Baykeeper with eco-group Friends of Casco Bay. Joe and his organization are working to make Maine the first East Coast state to implement a statewide nitrogen limit.

Plan your trip: Best time to go: July or August. Catch a ferry from Portland to Peaks Island to join a trip with the Maine Island Kayak Company (maineislandkayak.com). Stay at the Chebeague Island Inn (chebeagueislandinn.com); rooms start at $245.

How to help: Friends of Casco Bay (friendsofcascobay.org) relies on certified volunteers to collect data for its EPA-approved water quality monitoring program. The group is also a resource for ecological landscaping, a technique that aims to keep fertilizers and pesticides out of the bay.

Why go? On a small, sheltered cove on Vieques, a 22-mile-long, 4-mile-wide island east of Puerto Rico, Mosquito Bay is one of the world's few remaining bioluminescent bays worth seeing. At night, dinoflagellates glow blue-green when agitated, like fireflies in the ocean. Neon ribbons trail kayaks and swimmers.

Why care? After U.S. Navy occupation of Vieques ended in 2003, word spread about the island's unspoiled scenery. "The main threat now is the big push to develop Vieques for tourism," says Mark Martin Bras of the Vieques Conservation and Historical Trust.

This has led to a boom in unregulated tour operators and too many swimmers bringing sunscreen and bug repellent that kill the delicate dinoflagellates. Construction and deforestation unleash light and sediment that are also dimming the waters.

Plan your trip: The biobay is accessible year-round and is best viewed during a new moon. A regular 90-minute ferry runs from Fajardo, on Puerto Rico's east coast, to Isabel Segunda on Vieques. (Cost: $4 round-trip.) Stay at Hix Island House (hixislandhouse.com/); lofts start at $185 in summer.

How to help: The Vieques Conservation and Historical Trust (vcht.com) advocates for the protection of the biobay and lists licensed guides.

Why go? The Everglades is the largest subtropical wilderness in the United States, with 1.5 million acres of marshes, estuaries, and prairies, and shady stretches of pine, cypress, and mahogany. The great "River of Grass" flows from its northern headwaters at Lake Okeechobee southwest into the mangrove tangles at the southern tip of the Florida peninsula.

Why care? Decades ago, the Everglades' freshwater flow was altered to accommodate agriculture, growing cities, and safety concerns. The dams and diversions starved and polluted the delicate ecosystems and the species that relied on them.

Plan your trip: Everglades National Park (nps.gov/ever) is open year-round, but some facilities have limited hours during the wet summer season. Seven miles from the Flamingo Visitor Center, hikers can pick up the West Lake Trail, on which American crocodiles often make appearances. Search Green Lodging Florida (dep.state.fl.us/greenlodging) for a place to stay or check out Ivey House Bed & Breakfast (iveyhouse.com); rooms start at $70.

How to help: The Everglades Foundation (evergladesfoundation.org) leads the battle to protect and restore the River of Grass.

Why go? Divers and snorkelers rave about the majesty of Roatán's biodiverse waters and coral reef system. Psychedelic tube sponges grip the sea wall, and tropical fish dart in and out of nooks in the reef.

Why care? Warming oceans have triggered major bleaching events that have turned once-vibrant Caribbean coral systems into blanched skeletons. Coastal development, illegal fishing, and reckless divers have also taken a toll. Now the trend threatens Roatán. But the fragile reefs are also resilient. Experts now say, given time to heal and a healthier environment, the ecosystem could recover.

How to help: Support the Coral Reef Alliance (coral.org) in its efforts to protect reefs worldwide.

Why go? On the shores of Manitoba's Hudson Bay, as sea ice breaks up, the region's famous polar bears return to terra firma. Arctic foxes roam the coastline, and herds of caribou begin to migrate. Thousands of beluga whales congregate where the Churchill River empties into the inland sea.

Why care? On average, Hudson Bay's ice is breaking up three to four weeks earlier than it did 30 years ago. One of the most visible signs of this shift is the sharp decline in the number of polar bears that live here. The early spring melt and later fall freeze destroy the ice platforms from which polar bears hunt ringed seals, their main food source.

Plan your trip: The town of Churchill is the starting point for trips into polar bear territory. The Churchill Northern Studies Center (churchillscience.ca) hosts "learning vacations" from February through November. Visit in fall to see the bears leave their summer lairs in search of newly frozen sea ice.

How to help: Check out Polar Bears International (polarbearsinternational.org/simple-steps) for smart advice on reducing our carbon footprints.

Why go? The 19 islands retain 95 percent of their native species, including plants and animals that are found nowhere else in the world. Each island has its own phenomenal features, from smoking calderas (craters) and green-sand beaches to giant tortoises and prancing birds with powder-blue feet. Española Island is the most paradise-like.

Why care? Three years ago, UNESCO put the entire archipelago on its list of World Heritage sites "in danger." They cited the perils of illegal fishing, unsustainable tourism, and immigration, and the single greatest threat to the islands: non-native species.

Plan your trip: Peak months include mid-June through early September, and mid-December through mid-January. December through May is the rainy season, when air and water temps are warm and inviting. The rest of the year the water is cooled by the Humboldt Current, which also carries a vast array of marine life. All visitors to the islands must be accompanied by a certified naturalist guide. The Galápagos Conservancy (galapagos.org), which works closely with Galápagos National Park (galapagospark.org), maintains a list of travel partners that promote sustainable tourism.

How to help: Learn more from the Charles Darwin Foundation (darwinfoundation.org) about what's stressing the islands.

Kimberly Lisagor and Heather Hanson are the co-authors of the award-winning "Disappearing Destinations."

Heather's home base: Boulder, Colorado.
Her favorite coast: Rincón, Puerto Rico.
Next great escape: A weeklong mother-daughter-sister trip along the southern coast of Ireland, from Dublin to Galway.