Airlines duke it out in funny commercials 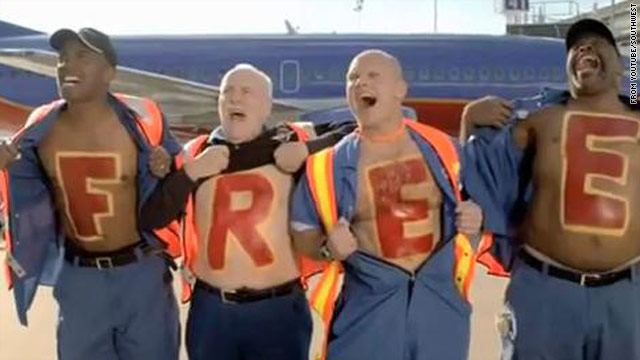 (CNN) -- Forget dreamy clouds and joyful airport reunions. The latest airline commercials have two of the country's most popular low-cost carriers poking fun at each other with the help of topless men and mooing passengers.

In one corner, we have Southwest Airlines, customer satisfaction champ and financial success story even in the midst of some very tough times for the industry.

In the other corner, AirTran Airways, a smaller but feisty competitor in the battle for passenger dollars and loyalty.

Southwest recently took a jab at its rival with a commercial called "Battle Cry." It shows airport workers lining up on the tarmac in front of a plane (whose logo is pixelated but still recognizable as AirTran's) and yelling to get the attention of the passengers inside. Once they have an audience, the men lift their shirts to reveal giant letters on their bellies that spell "Bags Fly Free."

The ad is Southwest's not so subtle way of pointing out that AirTran charges coach passengers $15 for the first checked bag and $25 for a second, while Southwest does not have any fees for those items.

Late last week, AirTran came up with an answer to the commercial, making fun of Southwest's "open seating" policy.

"We've heard from many Crew Members from around the country about a funny ad currently running on network TV. We've been asked again and again how we planned to respond," the airline wrote on its internal Web site, InsideAirTran.com.

The page then includes what the airline calls an "'udderly' hysterical video" showing passengers dressed as cows waiting at an airport gate for the boarding process to begin.

The gate agent, waving a cowboy hat and speaking with a strong Southern accent, yells "Yeeehaw, we're about to board this airplane here, it's every steer for himself!" The bovine passengers are then shown pushing each other as they run down the gate to grab their seats.

AirTran said some of its crew members volunteered to take part in the commercial.

Which bothers you most: Checked bag fees or unassigned seating? Let us know in the comment section below.