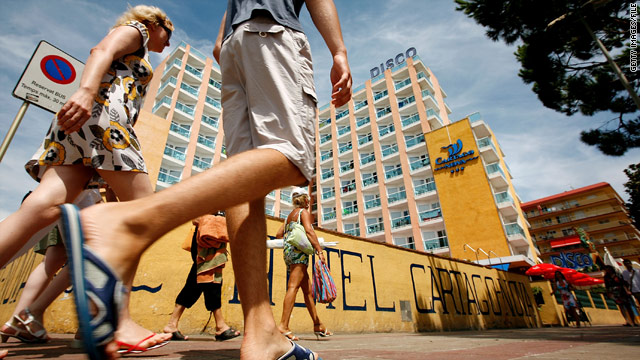 (CNN) -- There's good news and bad news for Americans itching for a change of scenery in 2010.

Travelers tripped up by the recession are getting back in the game, and prices reflect their growing appetite in key areas. Still, rising prices for airfares and cruises probably won't go as high as they were before the economic meltdown, analysts say.

CNN.com spoke with lodging, air travel, rental car and cruise industry experts to find out what kind of money Americans should expect to spend to vacation in 2010.

Let's start with the bad news. Rental car rates, which reached historic highs in 2009, are expected to keep climbing, according to Neil Abrams of Abrams Consulting Group, which compiles the Abrams Travel Data Rate Index.

Why were rates so high when the economy was so low? Rental companies can easily sell cars to get their fleets in line with demand. Hotels can't very well lop off 10 floors of empty rooms, but car companies have that kind of flexibility, Abrams said.

So while demand, at its lowest point, was down by about 25 percent last year, reduced fleets kept the market tight.

While car rental rates haven't been as high as they were at this time last year, Abrams expects rates for the year to be 5 percent to 8 percent higher.

"The bottom line is that there ain't going to be any bargains," Abrams said.

He suggests booking early to avoid the risk of being shut out or paying a higher rate at the last minute.

But if you need a place to rest your head at the end of a long drive, you're in luck. "According to our forecast, 2010 is really the trough" for average daily hotel rates, said Jan Freitag, vice president of global development for Smith Travel Research.

Rates are expected to be even lower than in 2009, which was "just a bloodbath for rates, from the hotels' perspective," said Freitag.

Some markets are better deals than others. A lot of supply growth in Phoenix, Arizona, and Houston, Texas, has yielded very good hotel deals, Freitag said. Amsterdam is a good value and cities in countries with economic woes -- including Portugal, Italy, Spain and Greece -- have had some rate declines.

New York, on the other hand, has bounced back. "Everybody thought that New York with the financial center would be lagging, but it's going to be hard to find a deal in New York," Freitag said.

Rates are likely to creep up toward the end of the year, so travel early and often, Freitag advises consumers.

Airline tickets are expected to be more expensive than last year, but they're unlikely to reach pre-recession highs, said airfare expert Bob Harrell of Harrell Associates.

"Fares were up dramatically in the summer of 2008. I don't think we're going to see those levels again unless fuel goes off the charts," Harrell said.

"But we've seen quite a run-up in fares since last summer, since they dropped off at the end of the summer."

A year-over-year increase of 17 percent is shown in Harrell Associates' analysis of one-way leisure fares on 280 major routes averaged over a two-week period in March. Last year's $103 average fare jumped to $121 this year.

Harrell said March is a tricky time to compare fares because the Easter holiday falls at different times each year, but overall he expects 2010 fares to be at least 10 percent higher than in 2009.

Airlines have cut capacity and there is pent-up demand from travelers who sat on the sidelines last year, Harrell said.

"People have been holding back on travel spending, and I think we're starting to see some of that come back now. And it's reflected in higher prices."

A very busy wave season -- the period from January to March that is traditionally a peak booking time for cruisers -- has prompted some cruise lines to announce price hikes.

Carnival Cruise lines implemented price increases of up to five percent this week for sailings in June, July and August, and Norwegian Cruise Line plans to hike prices by up to seven percent beginning April 2.

Carnival's CEO acknowledged in the price announcement that fares haven't climbed back to 2008 levels.

"You get a lot of value for your money. Of course the temptation is that you spend more money than you should once you're on the ship."