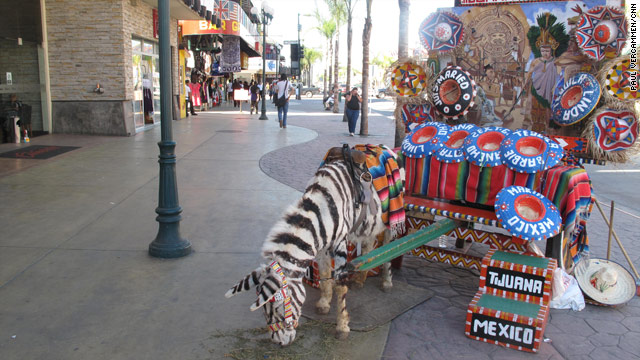 Up until a couple of years ago, the Mexican cities of Tijuana and Ensenada would be filled with American tourists during spring break. But persistent drug violence in Mexico has emptied the streets.
STORY HIGHLIGHTS

But the tourists from across the border never rushed into the streets of T.J., as it's often called.

Rocha made one sale, to a local resident, in an hour.

"The business, you can see for yourself, it went down 95 percent," he said. "Please tell them, the Americans, it's safe to come here. We are all Americanos, North Americanos. Do you see any problems here?"

A few yards away, there was a donkey painted like a zebra, hitched to a cart full of sombreros, a Tijuana photo opportunity. But no smiling tourists stepped into the picture frame. 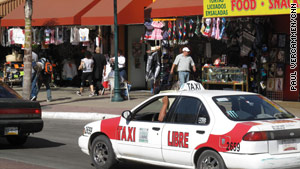 Mexican drug violence that has left at least 18,000 dead since 2006 has hurt tourism in Tijuana. 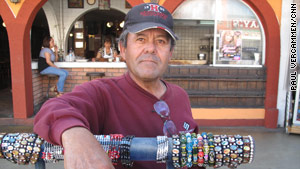 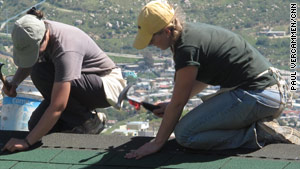 Visitors have been scared off because at least 18,000 people have been killed in Mexico since President Felipe Calderon dispatched the army to fight the drug cartels in December 2006.

Tijuana's grisliest murders include decapitations, dismemberments, dozens of police killings and the deaths of three teenagers at school.

As groups of 240 students from Westmont College near Santa Barbara, California, drove down the coast to do missionary work in Ensenada, Mexico, none ventured to Tijuana.

The missionaries doing spring break volunteer projects in poor neighborhoods were given a simple edict: Do not stop in T.J.

Hanna Walker kneeled, pounding nails into shingles, on a rooftop of a small house taking shape on a dirt road high above Ensenada.

"To be honest, I was a tiny bit nervous crossing the border," Walker said. "I've been to Mexico before, but not for service projects. But now that I have been here [Ensenada] a couple days, I am perfectly comfortable."

The Westmont students are taking precautions as part of their annual Potter's Clay missionary work.

"We are staying in a group," Walker explained. "We are making sure that I am with someone all the time. When we went downtown for dinner, we just paired up and walked around in twos, the buddy system. We locked cars. We're just being smart about it."

Ensenada welcomes any business it can get, as its tourism trade has also been choked off by concerns about border violence.

But we saw just two visitors who said they drove over the border to visit Ensenada. All the other beer-carrying, trinket-buying tourists came from the ship.

"People are afraid of driving by Tijuana," said Papas and Beer manager Cesar Marquez. "That's what's hurting us [Ensenada] the most."

To be honest, I was a tiny bit nervous crossing the border.
--Hanna Walker
RELATED TOPICS

Later, in Tijuana, as the shadows stretched out with the dropping sun, we were approached by a man with an outdated nylon jacket. His cheeks were chipped by acne scars.

The camera was far out of sight.

"I can help you find whatever you need," he said.

"What do you want? I help people find the good clubs and get dates and more. You pay me."

We told him we were journalists on a story and not interested.

"Oh then pay me, and I will tell you a lot for your story, about everything that goes on here," the hustler said.

Everything -- did he mean drugs or guns, or both?

We had no intent to find out, kept to our tight travel schedule and drove out of Tijuana to a border crossing just several cars deep.

More than five years ago, that vehicle line extended so far back into Mexico, a re-entry at San Ysidro, California, could take hours.

We zipped through the checkpoint in 10 minutes, another sign that Mexico's border violence is frightening off American tourists.