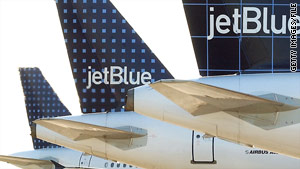 (CNN) -- Looking for an affordable last-minute getaway? JetBlue Airways is celebrating its 10th birthday with a $10 one-day fare sale Monday on flights from New York to the airline's original 10 destinations.

Travel must be booked on JetBlue's Web site by 11:59 p.m. CST Monday for travel on Tuesday or Wednesday, March 9 or 10.

The airline plans to roll out a series of monthly deals to mark the beginning of its second decade, a JetBlue announcement said.

On Wednesday, JetBlue will announce giveaways for New York-based customers on Twitter, the announcement said.

"We are excited to kick things off in our own backyard with these $10 fares and Wednesday's giveaway in New York," said Robin Hayes, the airline's chief commercial officer, in a statement.