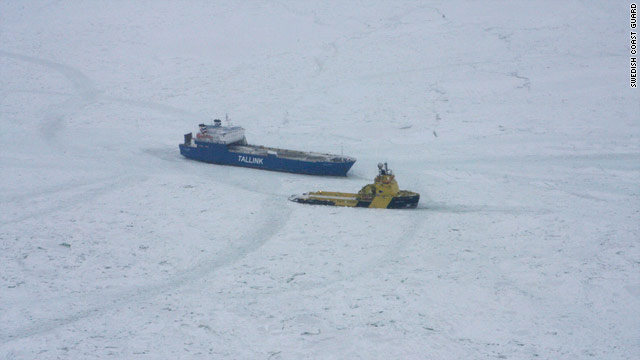 (CNN) -- Four ferries carrying about 1,000 passengers have been freed from heavy ice off the coast of Sweden and were back in port Friday, said the Maritime Search and Rescue Center.

Arctic winds hampered icebreakers' efforts to free the ferries and at least 30 other ships from the icy grip of the Baltic Sea on Thursday, according to Birger Knutsson, a spokesman for the maritime center, in Gothenburg, Sweden.

The area with the worst ice was bounded by mainland Sweden, the Stockholm archipelago and the Finnish island of Aland, according to the Swedish Maritime Administration.

"It has been a lot colder than normal in the southern parts of the Baltic Sea. But in the north, all is normal, with normal levels of ice," said Tommy Gardebring with the maritime group.

"However, in the worst-affected areas, the icebreakers that normally operate haven't been able to cope with the ice.

"There was never any danger for the safety of the vessels. But we have increased our preparedness, just in case, since the ice puts a lot of pressure on the sides of the ships," Gardebring said.