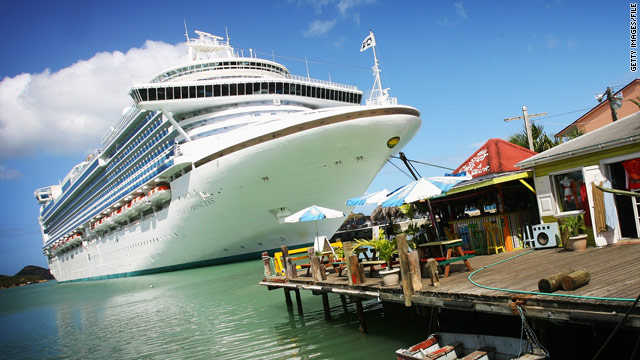 A bump in virus outbreaks on shore is likely to carry over to cruise ships.
STORY HIGHLIGHTS
RELATED TOPICS

(CNN) -- Suffering a bout of gastrointestinal illness in a cramped cruise ship cabin ranks pretty high on the scale of vacation nightmares. And given the bug going around this year, illness at sea is likely to spike.

Last week, Celebrity Cruises' Mercury ship returned to port in Charleston, South Carolina, from a sailing during which more than 20 percent of passengers -- about 400 -- fell ill.

The Vessel Sanitation Program, an arm of the Centers for Disease Control and Prevention, inspected the ship in Charleston and identified the culprit as norovirus, which causes vomiting and diarrhea. VSP can't say for sure where the virus originated.

"There were cases on the first day that were passenger cases, and there certainly is a connection with respect to increased norovirus in South Carolina. So it could have been from a passenger," said Capt. Jaret Ames, branch chief of the VSP, which works with the cruise industry to prevent and control gastrointestinal illnesses.

South Carolina's Department of Health and Environmental Control has reported more than twice the usual number of norovirus outbreaks or unknown outbreaks that appear to be norovirus since early January.

By February 24, the agency had identified about 40 outbreaks compared with about 15 by that time in the past few years, according to spokesman Adam Myrick.

Fourteen of those outbreaks occurred in a school or university setting and more than 20 in long-term care facilities, compared with 3 to 5 in each of those types of facilities in the same timeframe in recent years. The agency does not track outbreaks on cruise ships that originate from the state.

"You can see [norovirus increases] right now shore side, from the East to the West Coast, from other countries -- and we have a new strain," said Ames.

The VSP's investigation did reveal some sanitation issues on the Mercury.

"We did find some problems with things like dishwashing. The machines were not operating, at least when we were on board, as they're designed," Ames said. Final sanitizing temperatures were inadequate, he said.

The investigation also uncovered a few things that needed to be corrected in the laundry operation and cabin disinfection, Ames said.

"We delayed the departure of the ship for 24 hours in order to make sure that we did everything the way it needed to be done and we didn't rush any of the cleaning," Martinez said.

Mercury passenger Monica Blilie, a retiree from Gautier, Mississippi, was pleased with Celebrity's response during the trip.

"The crew did everything they could do, as far as we could see," Blilie said. She didn't get sick during the trip, but her husband, Jon, developed gastrointestinal illness the day after they returned.

"You could not touch anything, they served everything. You couldn't even put salt and pepper on your own food. They did that," Blilie said. The crew also made it clear that passengers should use hand sanitizer and wash their hands regularly.

The VSP requires cruise ships to have Outbreak Prevention and Response Plans, which the Mercury implemented with increased cleaning and disinfection across the ship as well as modifying food service procedures.

Outbreaks of illness on cruise ships aren't unusual, and norovirus outbreaks don't necessarily correlate with the sanitation scores the VSP gives cruise ships in regular unannounced inspections. Illness outbreaks caused by bacterial or parasitic pathogens can more clearly be traced to a failure in an onboard system, Ames said.

The Mercury scored a 94 out of 100 on its last inspection. Inspection scores of 85 or lower are considered unsatisfactory by the VSP.

Dr. Bradley Connor, former president of the International Society of Travel Medicine, said the Vessel Sanitation Program "has raised the standards of the industry tremendously," but norovirus outbreaks often include factors beyond the control of inspectors and cruise lines.

"Sometimes you can have the cleanest ship with the best scores that unfortunately is hit by norovirus, and a lot of that has to do with who the passengers are," Connor said.

Still, the scale of the recent Mercury outbreak is unusual. Few of the more than 30 gastrointestinal illness outbreaks recorded by the VSP since the beginning of 2008 affected more than 20 percent of passengers, and the vast majority affected less than 10 percent.

So what can passengers on upcoming cruises do to stay healthy?

"Take reasonable precautions, but try not to get paranoid about it," Brown said.

"[Gastrointestinal illness] certainly happens on cruise ships and it's certainly a disappointment when you're on your vacation and you get it, but you can get it at home."