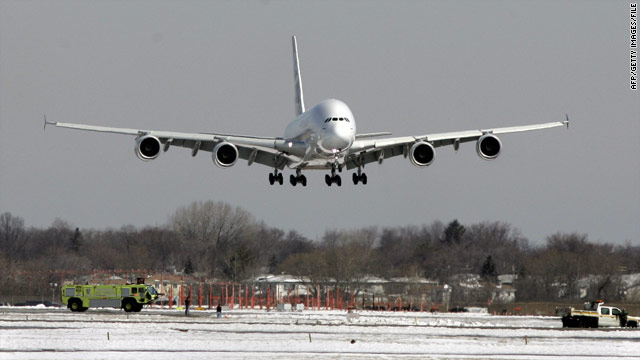 (CNN) -- New York's John F. Kennedy International Airport isn't exactly the poster child for on-time departures and things may get worse before they get better for travelers using the airport this spring.

The $376 million project for Runway 13-31, also known as the Bay Runway, will widen it from 150 to 200 feet and add taxiways, all in an effort to ease traffic congestion at the airport.

"The improvements are expected to reduce flight delays overall by an estimated 10,500 hours per year," the office of New York Gov. David Paterson said.

It also tried to alleviate passenger worries about potential bottlenecks.

"Airlines are adjusting schedules and operations to mitigate delays, and the airport's three remaining runways will be utilized to their full capabilities during the Bay Runway's closure."

Officials are reducing the number of arrivals and departures at the airport from about 1,300 a day to 1,050, said John Kelly, a spokesman for The Port Authority of New York and New Jersey, which operates JFK.

"The aim is to have [the construction] be invisible to the traveler," Kelly said.

JetBlue, the largest domestic carrier at the airport, is voluntarily reducing its schedule by 10 percent to help reduce bottlenecks, said spokeswoman Alison Croyle.

"The FAA predicts that the delays during the closure will be similar to those seen during peak summer months," Croyle said. "So we expect there are going to be delays, but we're partnering with the Port Authority as well as other airlines to ensure that that impact is minimized."

There are about 170 JetBlue flights out of JFK a day, but the airline has decided to operate on a winter schedule during the construction, limiting flights to about 150 a day.

JFK also serves as a hub for American and Delta Airlines.

American Airlines hopes the impact on its customers will be minimal, said spokesman Tim Smith. The carrier is keeping its current schedule at JFK but is delaying its planned flight increases for the summer season until July.

"[We] can't say there will never be any delays, but this is a good compromise that allows the work to be completed more quickly," Smith said.

American Airlines and American Eagle operate a combined 90 departures per day at JFK. That number is expected to go up to about 100 after the project is completed.

At more than 14,500 feet long, or almost 3 miles, the Bay Runway is one of the longest in the country. It handles more than half of all departures at JFK, according to The Port Authority of New York and New Jersey.

A veteran air traffic controller who works at the airport said the runway closure will definitely affect travelers, despite reassurances from officials to the contrary.

"There will be hours of the day when we normally experience heavy departure volume and we're going to run delays that are going to be exacerbated by not having that runway."

The bottlenecks could be worst between 5 p.m. and 10 p.m. when there is a steady stream of departures, Abraham said. On a good weather day, delays could run 15-30 minutes, but if the weather conditions deteriorate, they could be an hour or more, he estimated.

Still, the project had to be done, Abraham said, and he "wholeheartedly endorsed" the decision to do it all at once instead of piecemeal over a couple of years.

In general, Abraham always recommends that people fly first thing in the morning whenever possible to avoid delays.

Air travelers know JFK can be challenging when it comes to punctuality even in the best of times.

Last year, JFK was ranked 22nd out of 31 major U.S. airports in on-time departures, according to the U.S. Department of Transportation's Bureau of Transportation Statistics. About one-fifth of flights did not take off on time, the report said.

With about 48 million travelers a year passing through its terminals, JFK is the 13th busiest airport in the world in terms of passenger traffic, according to Airports Council International.