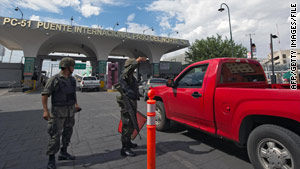 Washington (CNN) -- The United States has renewed a travel alert to Mexico, citing increased violence in the country.

The alert, issued Sunday by the State Department, is in effect until August 20 and supersedes an alert issued August 20, 2009.

"Recent violent attacks have caused the U.S. Embassy to urge U.S. citizens to delay unnecessary travel to parts of Michoacan, Durango, Coahuila and Chihuahua ... and to advise U.S. citizens residing or traveling in those areas to exercise extreme caution," the alert says.

"Drug cartels and associated criminal elements have retaliated violently against individuals who speak out against them or whom they otherwise view as a threat to their organization. These attacks include the abduction and murder of two resident U.S. citizens in Chihuahua."

More than 16,000 people have died in Mexico since President Felipe Calderon declared war on the drug cartels shortly after assuming office in December 2006. Ciudad Juarez, in Chihuahua state across the border from El Paso, Texas, is the most violent city in the nation.

"The situation in the state of Chihuahua, specifically Ciudad Juarez, is of special concern," the alert says.

"Mexican authorities report that more than 2,600 people were killed in Ciudad Juarez in 2009," the report states. "Additionally, this city of 1.3 million people experienced more than 16,000 car thefts and 1,900 carjackings in 2009. U.S. citizens should pay close attention to their surroundings while traveling in Ciudad Juarez, avoid isolated locations during late night and early morning hours, and remain alert to news reports."

But the problems are not limited to Juarez, the State Department says.

"Mexican drug cartels are engaged in violent conflict -- both among themselves and with Mexican security services -- for control of narcotics trafficking routes along the U.S.-Mexico border," the report says. "In order to combat violence, the government of Mexico has deployed military troops throughout the country. U.S. citizens should cooperate fully with official checkpoints when traveling on Mexican highways.

"Some recent Mexican army and police confrontations with drug cartels have resembled small-unit combat, with cartels employing automatic weapons and grenades. Large firefights have taken place in towns and cities across Mexico, but occur mostly in northern Mexico, including Ciudad Juarez, Tijuana, Chihuahua City, Nogales, Matamoros, Reynosa and Monterrey. During some of these incidents, U.S. citizens have been trapped and temporarily prevented from leaving the area."

A number of areas along the border continue to experience a rapid growth in crime, with robberies, homicides, petty thefts and carjackings increasing during the past year nationwide, the alert says. The State Department reports notable spikes in Chihuahua, Sinaloa, and northern Baja California.

"Ciudad Juarez, Tijuana and Nogales are among the cities which have experienced public shootouts during daylight hours in shopping centers and other public venues," the alert says.

"Criminals have followed and harassed U.S. citizens traveling in their vehicles in border areas including Nuevo Laredo, Matamoros, and Tijuana. Travelers on the highways between Monterrey and other parts of Mexico to the United States (notably through Nuevo Laredo and Matamoros) have been targeted for robbery and violence and have also inadvertently been caught in incidents of gunfire between criminals and Mexican law enforcement. Such incidents are more likely to occur at night but may occur at any time," the alert says.