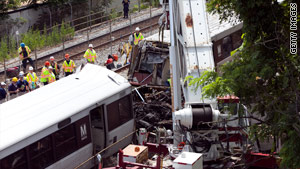 Washington (CNN) -- Saying it makes no sense that the federal government sets safety standards for railroad passenger cars but not for subway or light-rail cars, the National Transportation Safety Board on Thursday added improved subway car design to its list of "most wanted" transportation safety improvements.

The safety board is recommending the government set standards not only for the crashworthiness of transit cars, but also to address the ability of passengers to escape from damaged cars and for rescuers to enter them.

In numerous crashes, firefighters have had difficulty opening doors and windows to help trapped passengers, in one case taking more than an hour to enter a car to confirm it was empty.

Calls for improved subway car construction date back decades but were heightened in June when two Washington Metro trains collided, one telescoping into the other, killing nine passengers and injuring more than 50.

The Metro crash showed the "stark" differences in federal oversight of heavy-rail and light-rail systems, said the safety board's chair, Deborah A.P. Hersman. She said that at the crash site, Metro subways run parallel to a line that carries Amtrak heavy-rail passenger trains.

"One side the fence, you have crashworthiness standards for the cars that the people ride in; on the other side of the fence, there are no standards. That doesn't make any sense," she said.

The National Transportation Safety Board will hold a three-day hearing on the Metro crash next week.

The safety board's list of "most wanted" safety improvements is advisory only. The board uses the list to highlight its priorities and to prod government agencies to take action.

The board also added two other areas of concern to the list -- one calling for safety management systems for domestic ships, and the other for improved oversight of airline pilot proficiency.

The pilot recommendation follows recent board hearings into the Colgan Air crash in February 2009 near Buffalo, New York. During those hearings, airline executives testified they were unaware that the pilot had failed several check rides before he was hired at Colgan.