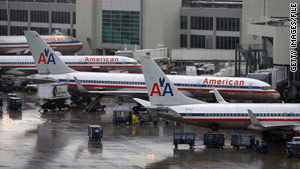 The first commercial flights to Haiti since the January 12 earthquake will take off from Florida on Friday.
STORY HIGHLIGHTS
RELATED TOPICS

(CNN) -- American Airlines announced Tuesday it will resume commercial flights into Port-au-Prince, Haiti, on Friday, making it the first airline to do so.

Commercial flights ended on January 12, when a 7.0-magnitude earthquake killed more than 200,000 people and damaged many of the country's buildings, including some at Toussaint Louverture International Airport, in the capital.

The first flight will depart Miami International Airport in Florida at 6:40 a.m., arriving at 8:35 a.m. in Port-au-Prince, American Airlines said in a news release.

"This is that crack in the dam that we so badly needed and our passengers so badly wanted, to start moving regularly scheduled traffic into and out of Haiti," spokesman Tim Smith told CNN Radio.

"We'll start out with three main flights a day from south Florida, two from Miami and one from Fort Lauderdale. Then we'll also fly a JFK New York flight into Haiti four days a week."

Smith said that, despite damage to the airport, the airline was prepared to deal with passengers.

"One of the things we did very soon after the earthquake is that, as we were going in carrying relief supplies, we also sent in some American employees and folks from a construction firm that we worked with on the mainland to actually begin working to repair our facilities there at the Port-au-Prince terminal."

Haitian customs officials will work out of a cargo facility because of damage at the main terminal, Smith said.

"These flights serve as major milestones toward helping the country rebuild," Peter Dolara, American's senior vice president for Mexico, the Caribbean and Latin America, said in the news release.

"With commercial air service restored, we can better connect loved ones and provide consistent transportation to and from Haiti."

"We have begun our journey to recover from the catastrophic earthquake, but with support from companies like American Airlines, we hope it won't be nearly as long," said Ralph Latortue, consul general of Haiti in Florida.

American has served Haiti since 1971 and employs more than 100 people in Port-au-Prince, according to the airline.

Since the day after the earthquake, American Airlines and American Eagle have continued flying into and out of Haiti -- carrying relief workers, medical personnel, humanitarian aid and evacuating hundreds of people.

A spokeswoman for Spirit Airlines, which had a daily flight from Fort Lauderdale to Port-au-Prince, said the company was working to gain approval to resume its flights beginning Friday.

A spokesman for Delta Air Lines said it was working with Haitian authorities to reinstate service "as quickly as possible."

The work on the American Airlines terminal was carried out by Odebrecht, a Sao Paulo, Brazil-based construction company that built American's terminal at Miami International Airport, said spokeswoman Renata Pinheiro.

A cargo building that was undamaged by the earthquake was transformed into a terminal, and immigration and customs services were located there, she said.

A terminal that suffered only minor damaged was fixed. "It wasn't a reconstruction of the airport itself, it was really making it operational," she said about the effort.

The company's workforce of 75 included 30 Haitian baggage handlers who "became construction helpers," she said. "Odebrecht's people trained them to do welding and painting. The really cool thing that we're super happy about is the fact that the whole thing came about in just three weeks."

Among the toughest challenges was finding construction supplies, the company said in a news release. Odebrecht solved that by obtaining materials in Puerto Rico and sending them by barge to the Dominican Republic, then moving them by truck to the Haitian capital.

"This has been a genuine labor of love, but also one of absolute commitment," said Antonio Pinto, Odebrecht's project executive in Haiti. "In the most basic human terms, it is essential to reopen this airport and to reconnect the people of Haiti with their families and friends abroad."

The company's other projects include rebuilding and fortifying levees in New Orleans, Louisiana, under contract with the U.S. Army Corps of Engineers.