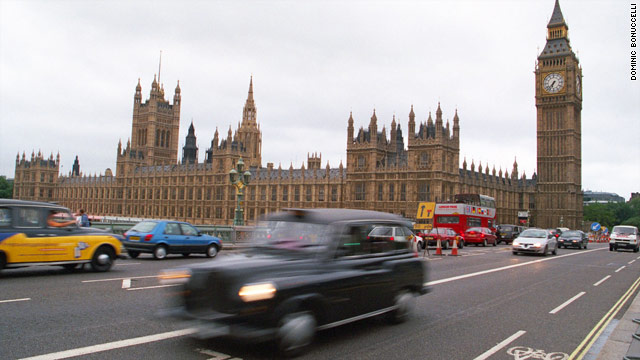 London's black cabs take you through a scenic urban landscape you'd miss if you relied on the underground Tube.
STORY HIGHLIGHTS
RELATED TOPICS

(Tribune Media Services) -- When people ask me about the scariest situation I've ever been in, I think back to a taxi ride I took to the Moscow airport in the early '90s. A no-neck guy who looked like a classic Russian mafia thug picked me up in a beat-up old car and drove for an hour down puddle-filled alleys and past derelict apartment buildings. All I could think about were those movie scenes where the good guy is taken down to the riverbank to be shot. Instead, the no-neck pulled up to the airport, shook my hand, and said, "Have a good fly."

Many Americans are wired to assume that taxi drivers in other countries are up to no good. And I've always said that if you're going to get ripped off in Europe, it'll probably be by a cabbie. But I've also found that most drivers are honest. Sure, scams happen. But with the right tips and a watchful eye, you'll get where you want to go without being taken for a ride.

Dishonest cabbies often lurk at airports, train stations, and tourist sights ready to take advantage of tired travelers. At Prague's main train station, cabbies at the "official" stand are a gang of no-good thieves who charge arriving tourists five times the regular rate. If you don't want to worry about getting conned the minute you arrive at a new destination, hop on public transportation.

In Prague, opt for the Metro instead of a taxi. Recently, I took a speedy train from Rome's airport to the train station downtown and then caught a bus to my hotel. It took me less than an hour to get from the airport to my hotel and cost 27 euros for the train fare and a handy week-long transit pass. A taxi alone would have cost 40 euros.

If you're at a taxi stand or flagging down a cab, get into the car only if it has a prominent taxi-company logo and telephone number. Be aware that if a taxi is called for you (for example, by a hotelier or restaurant), the meter often starts running when the phone call is received. Note that there really are variable rates and extra fees. Trips on nights and weekends generally cost more, and there are often surcharges for luggage and airport trips.

In a cab, insist the cabbie use the meter, agree on a price up front, or know the going rate. If you have Internet access, the Web site www.worldtaximeter.com can provide estimated taxi fares for larger cities. Or you can ask your hotelier when you book your room roughly how much the ride should cost from the airport.

A common trick is for cabbies to select the pricier "night and weekend" rate on their meter -- even if it's a weekday. An explanation of the different rates should be posted somewhere in the cab, often in English. If you're confused about the tariff, ask.

If you suspect a ripoff, make it obvious that you're following the route on your map or conspicuously writing down the cabbie's license information. Shame them into being honest. In many Western European cities, such as London, Paris, and Barcelona, meters are tamper-proof, so there's generally nothing to worry about.

For small groups or families, taking taxis can be cheaper and faster than using public transit. A group of three or four people can often travel less expensively by taxi than by buying individual bus tickets. Taxis are especially reasonable in Mediterranean countries and Eastern Europe. You can go anywhere in downtown Lisbon, Prague, or Athens for about $10.

To show appreciation for good drivers, include a tip of 5 percent to 10 percent. If they haul your bags and hustle you to the airport to help you catch your flight, you could toss in a little more. But if you feel like you're being driven in circles, skip the tip. If a driver owes you money, watch carefully as cash passes between hands, and count your change. (Cabbies can be expert at dropping a 50-euro note and picking up a 20.) Better yet, pay with small bills.

Despite their hassles, I love taxis. People often ask how I'm able to find the best beer or tastiest tapas in town. Many of my favorite backdoor tips and most interesting conversations have come from chatting up taxi drivers. In London -- my favorite taxi town -- drivers tend to know every nook and cranny, since they must pass a rigorous test on London geography to earn their license. Sure it may cost a little more than public transportation. But the nuggets, insights, and people make it worth the ride.