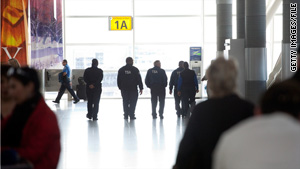 The TSA hopes to grant "secret" clearance to 10,000 airport workers over the next two years.
STORY HIGHLIGHTS
RELATED TOPICS

Washington (CNN) -- The Transportation Security Administration is upgrading security clearances for 10,000 of its airport personnel, giving them access to "secret" intelligence to help them better detect threats and stop terrorists, the agency said Friday.

To date, the agency has granted access to secret-level classified information to 744 front-line supervisors, managers and behavior-detection officers. It now hopes to be able to give that clearance to all 10,000 supervisory personnel in the next two years, it said.

The change does not involve airport screeners, the people responsible for inspecting people and luggage at airport checkpoints.

"It's a natural progression," TSA spokeswoman Sterling Payne said. "It's the next step in professionalizing our work force. What this will do is give them a leg up and a little more detail than what they're getting in the [current] briefing."

The change will empower the employees and make sure they have up-to-date and accurate information about intelligence threats, she said.

The majority of the agency's headquarters managers already have secret- or higher-level clearances for classified information.

James Carafano, a senior research fellow at the Heritage Foundation, said it is a good idea to increase the number of aviation security officials with access to intelligence.

The move could decrease the chance that information will be leaked because employees who are given clearance are trained to treat the information appropriately, he said.

Under the federal government's system of classifying information, "secret" clearance is above "restricted" and "confidential" but below "top secret."

Randall Larsen, director of the Institute for Homeland Security, was enthusiastic about the expanded base of people with access to "secret" intelligence, saying it is particularly needed by behavior detection officers, who look for travelers exhibiting unusual behavior.

"Just think, if we had pulled that Christmas bomber aside and spoken to him for just a few minutes, he would have never gotten on that plane," Larsen said.

But support for the move isn't universal.

"Our members are screaming because the problem is, as it always has been, that [airline pilots] are being left behind," said David Mackett, president of the Airline Pilots Security Alliance. "I'd much rather have the critical information get to the flight crews" and flight attendants, he said.

Mackett said airport security personnel "see passengers for several seconds, and yet they're not sharing [information] with air crews who see them for several hours."

He also said the TSA has "a very high turnover rate" compared with that of flight crews, so sensitive information will migrate away from the government.

Mike Karn, security chairman for the Coalition of Airline Pilots Association, agreed that flight crews should receive "secret" information, saying terrorists have proved that they can still get on aircraft.

"You have to strengthen them all the way up to that last line of defense," Karn said.