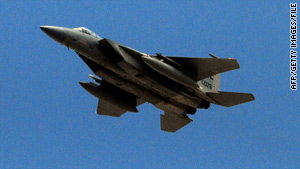 Portland, Oregon (CNN) -- Two F-15 fighter jets escorted a passenger jet that had been headed for Hawaii back to Portland International Airport in Oregon after a passenger in coach became "uncooperative," an airline official said Wednesday.

Hawaiian Airlines Flight 39 took off from Portland at 10:10 a.m. with 231 passengers and a crew of 10 when -- 90 minutes into the flight -- its captain decided to turn around the Boeing 767, said Keoni Wagner, the airline's vice president of public affairs.

It landed at 1:16 p.m. without further incident, the TSA said.

The military decided that fighters should accompany the flight after receiving "indicators" of a problem, said Lt. Cmdr. Gary Ross, a NORAD spokesman.

He declined to elaborate on those indicators but noted that NORAD often must make decisions with limited amounts of time and information about whether fighter jets should accompany commercial flights that may be experiencing problems.

"There was little time to react," he said. "The prudent thing to do was to scramble" the jets.

Upon the plane's return, the passenger -- a 56-year-old Salem, Oregon, man -- was escorted from the plane with his female companion without incident, the FBI and the Port of Portland said in a joint statement.

The FBI said it was not releasing his name because he had not been charged.

FBI agents and Port officers interviewed the passenger and his companion, the flight crew and others, then released the two and referred the matter to the U.S. Attorney's Office for review.

Local and federal officers searched the plane, then allowed it to depart again for Hawaii, absent the pair.

Oregon Air National Guard spokesman Sgt. John Hughel said command post officials told him they did not know who had placed the call for the escort.

In a statement, the Transportation Security Administration said the captain decided to return the plane to Portland "due to a suspicious passenger who made threatening remarks and refused to store his carry-on bag."

Port of Portland Public Information Officer Martha Richmond told CNN that the plane was turned around "due to concerns the crew had."

Hawaiian Airlines spokesman Wagner said pilots occasionally return a jet to the airport from which it took off. But, he said he had never known one of the flights to be escorted by fighter jets. "That's new for us," he said.

John Cornelio, also a NORAD spokesman, said the command routinely monitors events in the air via the Domestic Events Network, a sort of party line that includes representatives of the Federal Aviation Administration and other agencies involved in national security.

The FAA acknowledged last November that it notified military authorities 69 minutes after losing radio contact with Northwest Flight 188, which had overflown its destination of Minneapolis-St. Paul airport.

Under standard procedures, the FAA managers should have reported the incident to the Domestic Events Network five to 10 minutes after losing contact with the flight.

Radio contact was eventually restored and the plane was redirected to its destination, where it landed without incident.

Afterward, the FAA promised to take steps to prevent a repeat of that failure.

The incident was one of two that occurred Wednesday. A Northwest Airlines flight preparing to take off from Miami International Airport in Florida for Detroit's Wayne County International Airport instead taxied back to the gate after a passenger "was heard making inappropriate remarks and acting disruptively," the airport said in an incident statement.

At the gate, local law enforcement and TSA personnel met the aircraft and all passengers were taken off the plane. The passenger and three companions were questioned by Miami Dade County police.

The aircraft was searched and cleared for its flight.