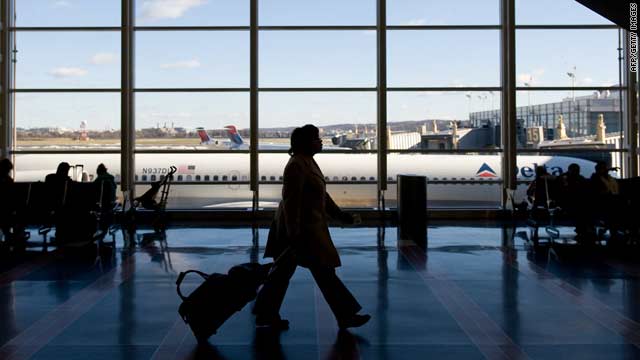 The Department of Homeland Security is looking to beef up the number of flights that carry air marshals.
STORY HIGHLIGHTS

(CNN) -- U.S. anti-terrorism officials are pushing to get more air marshals on American jetliners and beef up efforts to screen visa applicants overseas after some stinging criticism from President Obama.

Internal notices issued Tuesday and Wednesday by the Department of Homeland Security ask employees to step up to train as air marshals and to serve at U.S. diplomatic posts abroad. Both moves follow Obama's call for immediate reforms to prevent the kind of "potentially disastrous" failure involved in the unsuccessful attempt to bomb a U.S. jetliner on Christmas Day.

In particular, agents from the Immigration and Customs Enforcement division are being sought out for air marshal posts, since they already receive some of the necessary training in their regular jobs.

In 2008, CNN reported that fewer than 1 percent of the average of 28,000 daily commercial flights carried air marshals. Nor was an air marshal aboard Northwest 253 on its Christmas Day flight from Amsterdam, Netherlands, to Detroit, Michigan

And DHS employees are being asked to volunteer for assignments at U.S. diplomatic missions to help State Department officials review applications for visas.

The assignments, "some of which are located in high-threat areas," would last at least 30 days, the notice states.

ICE agents already are posted in a dozen countries to weed out applications from potential terrorists or criminals, but the new notice seeks people to conduct in-depth background checks and write intelligence reports. Federal officials told CNN they would back up State Department officials who lack law-enforcement experience to look for security threats.

After meeting with his homeland security and counterterrorism team Tuesday, Obama told reporters that the government "has to do better" to stop attacks like the December 25 attempt to blow up Northwest Airlines Flight 253.

The suspect in that attack, 23-year-old Umar Farouk AbdulMutallab, was indicted Wednesday on six criminal counts, including attempting to blow up an airplane and attempting to murder the other 289 people aboard.

An unclassified version of the administration's preliminary report on the plot will be released Thursday, White House spokesman Robert Gibbs said. But privately, Obama told his national security team that the incident represented "a screw-up that could have been disastrous," according to a senior administration official who spoke on condition of anonymity.