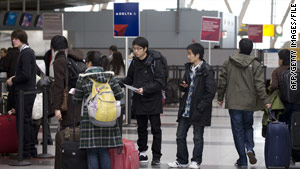 CNN has learned the U.S. government has loosened the criteria that it takes to be put on a no-fly list.
STORY HIGHLIGHTS

Washington (CNN) -- The U.S. government has lowered the threshold for information deemed important enough to put suspicious individuals on a watch list or no-fly list, or have their visa revoked, senior State Department officials tell CNN.

The government overhauled criteria it uses for putting possible terrorists on such lists as a result of the failed Christmas Day attack, officials said. They spoke on the condition of anonymity because of the sensitive nature of the material

Umar Farouk AbdulMutallab, the 23-year-old Nigerian who allegedly launched the failed attack, was not put on a no-fly list. That's because the information his father provided a U.S. embassy about his son becoming radicalized and possibly going to Yemen did not meet then-applicable standards to put him on such a list or to cancel his visa.

"Based on the criteria, he fell below the line and went into our database, but not a watch list or no-fly list, and his visa wasn't revoked based on the analysis of the threat," one senior official said. "We have a new standard now, which will allow us to capture more people."

Another official said that if all relevant agencies had the entire intelligence picture, including National Security Agency (NSA) intercepts about a "Nigerian" possibly planning an attack against the U.S., AbdulMutallab "would have absolutely been no-fly listed and his visa would have been revoked."

We've gone back over these databases, and there have been additional actions taken.
--Philip J. Crowley, State Department
RELATED TOPICS

Since the attempted attack, the intelligence community has scrubbed the entire Terrorist Identities Datamart Environment (TIDE) database of more than 500,000 suspects with the new criteria, adding additional individuals to the U.S. watch lists and no-fly lists as a result. Several visas have also been revoked.

"Rest assured that in light of what happened on December 25, we've gone back over these databases and there have been additional actions taken," Assistant Secretary Philip J. Crowley told reporters. He declined to provide statistics, saying the numbers were constantly changing.

When discussing the new threshold, officials suggested it is more an art than science.

"The threshold might be how much information do you have? What kid of confidence do you have in the information that is available," the first senior official said.

"It will involve an assessment of risk, the perception of risk and our tolerance of risk."

But the officials suggested the new standard is much lower than before December 25. For example, decisions could be taken to put someone on a no-fly list or a watch list based on one credible source, instead of the previous standard of using multiple sources.

"We had a new threat, and we are going to, for a period of time, tilt back to a more conservative approach," the official said.

Officials recognize the costs for grounding more people and providing extra screening for passengers from specific countries, pointing to blowback from several countries who are protesting their inclusion on the list.