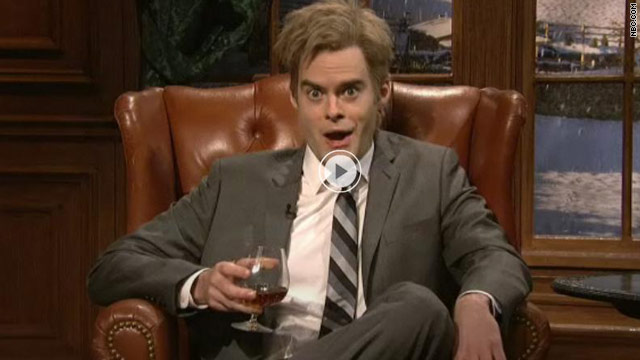 "SNL's" Bill Hader as Julian Assange, complaining that he, not Mark Zuckerberg, should have been Time's Person of the Year.
STORY HIGHLIGHTS

(CNN) -- The Web's controversy du jour found its way onto "Saturday Night Live" this weekend, with a fictional Julian Assange complaining that his work with WikiLeaks should have made him, not Facebook's Mark Zuckerberg, Time magazine's Person of the Year.

Last Tuesday, Zuckerberg received Time's yearly distinction, with the magazine saying Facebook has "merged with the fabric of American life." But devotees of WikiLeaks, which posts sensitive government documents, said the Time nod should have gone to Assange.

Saturday's skit starts with Zuckerberg, played by "SNL's" Andy Samberg, thanking Facebook users for helping him earn the honor. But in what's become a running gag, Assange appears to hijack the television signal.

"Tonight, I'd like to take a moment to congratulate Time magazine on the excellent selection of Mark Zuckerberg as Person of the Year," he says. "Time magazine -- always on the cutting edge, discovering Facebook only weeks after your grandmother."

"I give you private information on corporations for free, and I'm a villain," Hader/Assange says. "Zuckerberg gives your information to corporations, for money, and he's Man of the Year."

The skit also takes several jabs at the sex charges Assange currently faces in Sweden, and for which he was held last week in a London jail before posting bail.