Why Groupon was smart to spurn Google's $6 billion offer 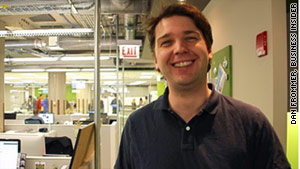 "I'm not sure this is a tech company that gets built in San Francisco or Palo Alto," says Groupon CEO Andrew Mason.
STORY HIGHLIGHTS
RELATED TOPICS

Sounds crazy, right? For most two-year-old companies, the idea of getting a $6 billion offer -- never mind turning it down -- is a wild dream.

Especially for an idea like Groupon that seems so simple: Daily money-saving coupon offers for local businesses, delivered by e-mail and over the web (A $50 credit to the Gap on sale for $25, for example). So it's understandable that Groupon's decision surprised people.

But Groupon was actually smart to turn down Google's offer.

Why? Because Groupon is wildly growing in popularity, and is picking up steam so fast that there is no knowing how much it could be worth in a year -- potentially much more than it is now.

Here's a snapshot of the company's growth: Groupon says it currently has 40 million subscribers to its daily coupon e-mails, up from 1.5 million a year ago. It is offering deals in more than 300 markets in 35 countries, up from just 28 U.S. markets last year.

And Groupon says it has saved its customers more than $800 million so far this year, up from about $50 million last year.

For consumers, that means spending less cash -- always a nice thing in tough economic times. And for local businesses, that means bringing new customers in the door, which makes them happy, too. That's why so many restaurants, stores, and service providers are rushing to get their deals on Groupon that the company has had to change its business model to keep up -- no longer just "one deal per day, per city," but several potential deals, customized for the user.

And while there are competitors like LivingSocial, which has some 10 million subscribers, attracting a lot of attention and investment, Groupon is still leading the pack.

Therefore, the promise of further explosive growth is the biggest reason that Groupon was smart to turn down Google's offer.

Imagine Facebook selling to Yahoo for $1 billion in 2006 -- it wouldn't have been worth $50 billion right now. Or imagine that Google had taken Yahoo's meager offer early in its history, too. It wouldn't be worth almost $200 billion as it is today.

But there's another big reason why it's smart for Groupon to remain independent, for now: The idea that Google could destroy Groupon under its leadership, due to a massive culture clash.

If history is any indication, Google would probably have tried to change Groupon, to make it more Googly. But the two companies have vastly different structures and cultures. And based on our understanding of Groupon, Google could potentially ruin Groupon very easily.

Why? Because Groupon is primarily a sales and writing organization, built on people-power and smiles. Of its 3,000 employees around the world, most are in sales, customer support, and editorial.

The company employs comedy writers and improv actors, and nurtures corporate gags like an office elaborately decorated as a bedroom for an imaginary, deranged tenant. It's very funny, but also the kind of thing that the brains at Google probably wouldn't find funny, or support.

"I'm not sure this is a tech company that gets built in San Francisco or Palo Alto," Groupon co-founder and CEO Andrew Mason told us when we visited his office last month. "It's so heavily people-dependent -- not really consistent with the way people think about building startups in [Silicon] Valley."

Google, meanwhile, is the prototypical Silicon Valley tech company -- the master algorithm. Yes, there are lots of people at Google, too, including many sales and support staff. But Google's culture is dominated by engineers, the sort of high-GPA geniuses who can answer all of the brain-teaser Google interview questions.

And that clash could have been a big problem for Groupon.

So for those reasons, Groupon actually looks smart for turning down Google's $6 billion offer.

Of course, that's not to say that the companies won't figure out a deal in the future, or that there isn't a chance that Groupon could stumble, and be worth less in the future.

But based on the way Groupon is growing in popularity today -- and is expected to generate more than $2 billion in sales next year -- turning down Google's offer isn't as crazy as it sounds.