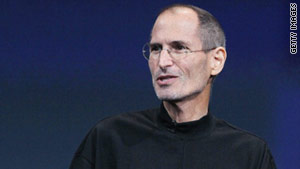 Apple CEO Steve Jobs may not be in a hurry to pick up his $37.91 in unclaimed property.
STORY HIGHLIGHTS
RELATED TOPICS

(CNN) -- Steve Jobs has yet to accept small amounts of money owed to him by several companies, including his own.

Apple filed a claim with the state of California saying its CEO, Steven P. Jobs, hasn't claimed property worth $37.91, according to a listing with the state controller's office.

The property type is listed as "other," and a spokesman for the controller declined to elaborate on what the item is because that information isn't public record.

We're guessing it doesn't mean that Jobs forgot to claim his annual bonus.

California law requires claims be posted for property "abandoned or lost" for more than three years. If the person doesn't claim it after six months, the property is transferred to the state, which then attempts to contact the owner, the spokesman said.

The form was filed by Apple Computer Inc., which was the name of the Cupertino, California, company for about three decades before changing to Apple Inc. in 2007.

The document was first reported by the website Gawker, in a post titled, "Apple Has No Idea Where Steve Jobs Is."

While the amount might seem small -- and it certainly would be considered inconsequential for a billionaire like Jobs -- it's the equivalent of nearly 38 years of cash salary for the Apple CEO. Jobs famously takes just $1 per year in salary, cushioned by generous stock options.

Apple didn't immediately respond to a request for comment.

Claims from insurance and technology companies are also listed on the controller's office website. IBM reported that it owes Jobs $21.45 in stock and another mysterious property listed as costing $14.30. Time Warner, which owns CNN, filed a claim last year saying it owes Jobs 20 cents.