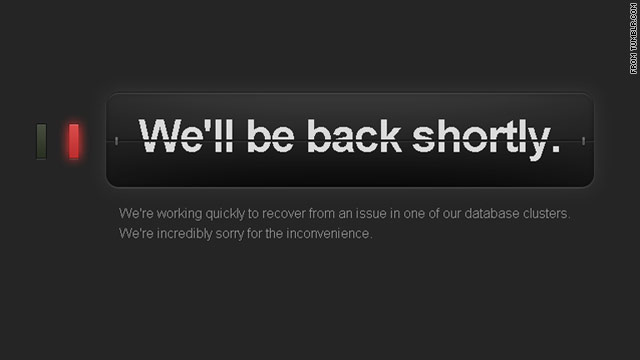 Tumblr is a blogging site that fits somewhere between Twitter and WordPress. It crashed on Sunday night.
STORY HIGHLIGHTS
RELATED TOPICS

(CNN) -- It bills itself as "the easiest way to blog." But the hip website Tumblr crashed on Sunday night and hasn't been online since.

"This has been a slow and painful recovery, but we're almost through. We'll have more info to share as soon as we can post to our blog again," said a message on the company's Twitter feed at about 9 a.m. ET on Monday.

At about 7 p.m. ET on Sunday, the site posted this message:

"We're working quickly to recover from a major issue in one of our database clusters. We're incredibly sorry for the inconvenience."

Visitors to the site were met with a graphic that said, "We'll be back shortly."

Tumblr, which, like its competitor Posterous, fills a niche somewhere between a Twitter feed and a full-fledged blogging platform, has been growing quickly as of late. The blog TechCrunch declared its growth was "on fire" this summer.

About 49 million people visit the site each month, according to quantcast.