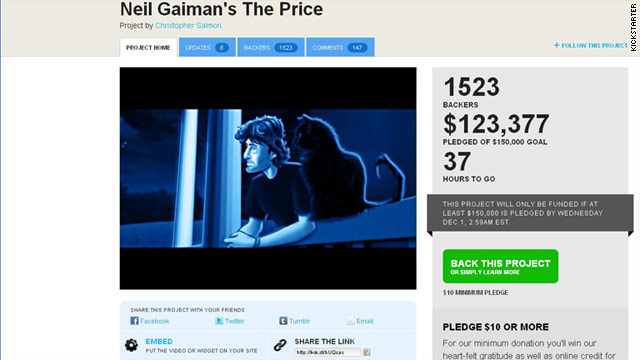 A drive to fund an animated film of Neil Gaiman's story "The Price" is one of a growing number of six-figure efforts on Kickstarter.
STORY HIGHLIGHTS
RELATED TOPICS

(CNN) -- Christopher Salmon just wanted to make an animated film from a short story he loved.

Searching for funds to make his film a reality, Salmon turned to Kickstarter, an online fundraising site for creative projects. His goal? To raise $150,000 to bankroll a 3-D-style short of author Neil Gaiman's "The Price," one of a growing number of six-figure projects on the 1½-year-old site.

"I was trying to find a way to fund it and wasn't finding success anywhere because it didn't fit the model -- especially here in America where the short film is viewed as a novelty," Salmon said Monday. "[Kickstarter] was perfect, because if the fans want it, they'll say something. And, boy, have they ever."

As of Monday afternoon, the Kickstarter project to fund Salmon's short film had raised about $124,000 -- some of it donated by fans of Gaiman, the internationally celebrated author of "Coraline" and other works. Salmon needs another $26,000 by Wednesday, the project's deadline, for it to become a reality.

Salmon's is one of two projects active on Kickstarter that are poised to land in the site's all-time Top 5 in terms of funds raised.

The other seeks start-up funds for a device that converts an iPod Nano into a wristwatch. It set out to raise $15,000 and now has hit a record $446,000 with more than two weeks to go.

Contributions to that project of at least $25 act as pre-orders for the TikTok and LunaTik multi-touch watch kits.

Since Kickstarter's launch in April 2009, more than 300,000 people have pledged more than $25 million toward what the site calls "creative ideas and ambitious endeavors," co-founder Yancey Strickler said. During that time, each month's total has been bigger than the one before.

Need a sign of the growth? Nine out of the site's 10 largest-grossing projects have closed in the past two months.

It's not a charity site or a way for small businesses to sell their wares. The projects that have been bankrolled include films, books, video games and technology start-ups.

"It's really exciting seeing that increasing diversity," Strickler said. "It's something we're really proud of and have always hoped for, but you can hope and you never know how it's going to turn out."

Kickstarter, which uses the Amazon Payments system, makes a profit by taking a small percentage of the funds donated to each project.

It uses an all-or-nothing funding system. Donors who pledge don't pay up until the project reaches its funding goal. If it falls short, they aren't charged.

On Salmon's project, a $25 pledge gets a digital download of the film, $50 gets a DVD and, at the top end, a $5,000 pledge [there have been six so far] earns an associate producer credit, VIP seating with Gaiman and Salmon at a screening of the movie and other rewards.

Until recently, the most high-profile project on Kickstarter was Diaspora, a social-networking site that creators said would emphasize privacy in ways that Facebook doesn't.

Creators set out to raise $10,000 and in June ended up with $200,000, promising donors access to the service's private alpha launch, which went live just more than a week ago.

Gaiman, whose honors include the Newbery Medal for children's writing, the Hugo for science-fiction and fantasy and a Carnegie Medal in literature, has written fantasy epics "Neverwhere" and "American Gods" and the groundbreaking graphic-novel series "The Sandman," among other works. Last year's feature-film adaptation of "Coraline" was nominated for an Oscar.

He's an active blogger and one of the most popular users of Twitter, with more than 1.5 million followers. He has used both to promote the fund drive.

"I think that the best thing about Kickstarter is it takes the ability to decide what you see, what happens, from the privileged few to the crowd," Gaiman said Monday via e-mail. "I can't wait until the first $50 million movie is funded through Kickstarter.

"For an author, it's fun. Instead of selling the rights to my story, to actually kick in a few hundred dollars -- but I don't think I could do that if I didn't trust Christopher Salmon to make a great little film."

"That project has a lot of people rooting for it," Strickler said. "Neil Gaiman is really incredible in how connected he is to his fans and the rest of the Web community.

"He could get money from anybody to do anything ... but he obviously sees something in engaging the audience in a different way, letting them really feel that ownership."

For Salmon, the next two days will be a pressure cooker, he said, as he sweats out the project's final hours.

He said a pitch to get donors to increase their pledges (in exchange for a poster) has gotten more than 100 takers. He's also hoping for a last-minute push from Gaiman and other backers.

But he said he's already been deeply affected by the Kickstarter community.

Salmon mentions a man -- a complete stranger -- who contacted him to say that he's homeless, but mowed lawns to raise money to give to the project because it means that much to him.

"I can't even explain or put words to it -- the unbelievable good will from all these people," he said. "So many stories you read are so horrible and so depressing you want to crawl under a rock. And then this."