Google's computers want to dress you 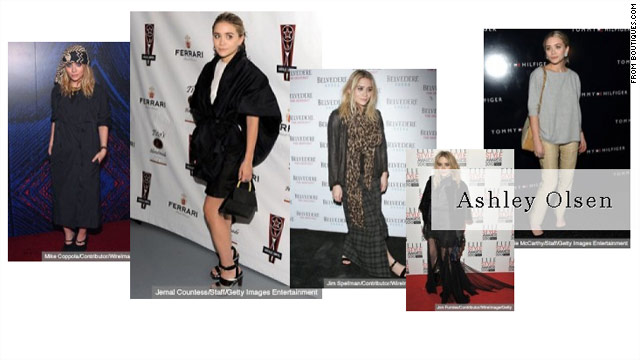 Google has launched Boutiques.com, a site that includes pages devoted to the styles of female celebs such as Ashley Olsen.
STORY HIGHLIGHTS

(CNN) -- What kind of turban would Ashley Olsen wear?

Google's computers know. And they desperately want to tell you.

The search-engine company on Wednesday launched a fashion site -- Boutiques.com -- that aims to use algorithms to help the world's internet users dress a bit more awesomely.

Among the features: a celebrity fashion guide and personal shopping profiles that help Google's computers learn your style over time, so the site can make recommendations about what you should wear.

Users who click on Olsen's boutique store, for example, see a list of items that the former child star deems appropriate for the masses. People can shuffle through these items one by one, clicking a button to indicate if they "love" or "hate" the clothing.

Tap and pay with your cell phone?
RELATED TOPICS

If you see the $710 scarf-turned-turban on Olsen's head as speaking to your inner Michelle Tanner, for instance, then you can click "love" and other items with a certain Sahara chic will show up in your personal profile.

"Boutiques uses computer vision and machine learning technology to visually analyze your taste and match it to items you would like."

"Computer vision." That sounds futuristic. But what does it mean?

Google elaborates in listing some new features of the site.

In one feature called "visual search," the computers analyze photos of clothing and sort it by color and type.

Then, applying a number of style rules (for example: "heavily patterned handbags don't tend to go with heavily patterned dresses"), Google can make recommendations about which items match and which would make "Project Runway's" Tim Gunn scowl. That feature is called "complete the look."

Finally, Boutiques also learns about its users' likes and dislikes in a feature that could be appropriately labeled "celebrity-fashion death match" (although it's actually called "Create Your Boutique").

Users sort through pairs of celeb fashion photos, clicking on the one that's more their style. Shoppers also can tell the site the colors they favor as well as what cut of dress they tend to reach for and the "silhouettes you hate."

The site includes pages devoted to the styles of female celebrities. Among them are both Olsen twins, the rapper Eve, Kelly Osbourne (daughter of Ozzy), Nicole Richie (daughter of Lionel), as well as trend-setters such as Carey Mulligan, the short-haired star of "An Education" and the "Wall Street" sequel, "Wall Street: Money Never Sleeps."

Overall, Google says it's trying to make shopping for clothes online as easy as it is to shop for gadgets. There are a number of sites and online features that compare specs on new computers and smartphones.

Fashion is more difficult, writes Google's Munjal Shah, because it's more about an overall impression and style -- not specifications that go in a chart.

"With fashion, reviews and specs are less important; fashion shopping is about discovering something that fits your taste and feels right," she writes. "The Web works well for buying cameras and other hard goods but for soft goods, such as clothing and accessories, it's not the same as shopping in a store."

Google, of course, is not the first to try its hand at making the shopping mall work on the internet.

TechCrunch's Leena Rao notes that the site is a combo of lots of other ideas that are floating around the realm of online shopping.

Rao says the site is much improved from Google's old shopping site.

"As an avid online shopper and someone who loves fashion, I have always found Google's product search to lack any sort of aesthetic appeal," she says. "Pictures are small, filters are too basic for power shopping and for the fashion-focused crowd; the overall design is unappealing."

Boutiques.com only features women's clothing for the moment -- and most of it is pretty darn expensive. (Wal-Mart and Old Navy are not in its list of "designers.")

If you check it out, let us know what you think in the comments.