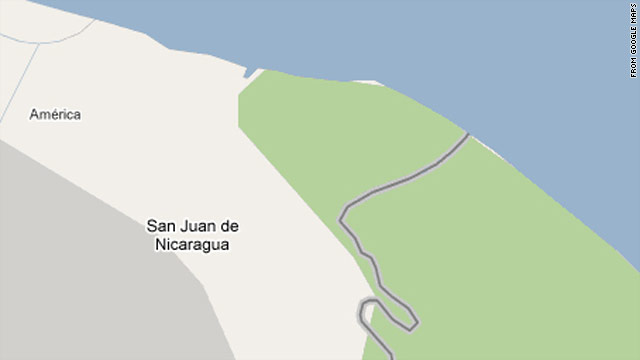 Google Maps has updated the border between Nicaragua and Costa Rica following a dispute. The old version of the map is shown here.
STORY HIGHLIGHTS
RELATED TOPICS

The California company on Friday night said it had updated the digital border between Nicaragua and Costa Rica with new data from the U.S. State Department. This follows a dispute that developed between those two countries over a piece of land near the San Juan River, on the Caribbean Coast.

A Nicaraguan official cited the Google Maps version of the border as justification for a reported raid of the area, according to local news.

"It is our goal to provide the most accurate, up-to-date maps possible. Maps are created using a variety of data sources, and there are inevitably going to be errors in that data," Google said in a statement issued on its Lat Long Blog, which covers mapping technology. "We work hard to correct any errors as soon as we discover them."

Google says the U.S. State Department provided the faulty data. The tech company updated the map by requesting that the federal department update its information to reflect agreed-upon treaties.

"Once our updates go live in Google Earth and Maps we will be depicting the border according to the most recent and definitive records available," the Google blog says. "But as we know, cartography is a complex undertaking, and borders are always changing. We remain committed to updating our maps as needed."

The State Department did not immediately respond to a CNN request for comment.