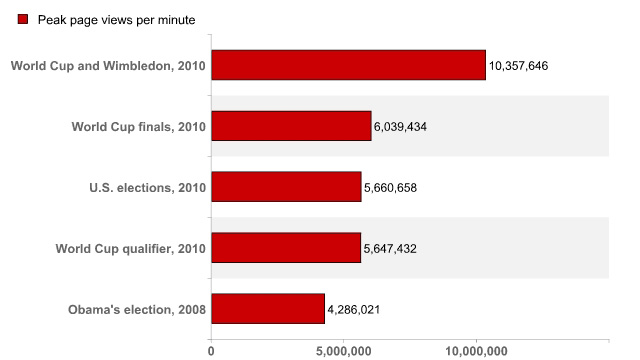 (CNN) -- President Obama's election in 2008 was historic. But in terms of internet traffic, Tuesday's midterm election was more popular, according to the internet traffic monitor Akamai Technologies.

As election results rolled in Tuesday night -- with Republicans taking control of the U.S. House of Representatives -- internet traffic spiked at a high of 5.7 million page views per minute, according to Akamai.

By comparison, Obama's presidential election in November 2008 saw a traffic high of about 4.3 million page views per minute, according to the company's Net Usage Index, which measures traffic to major news websites.

The top online news event was recorded by Akamai on June 24 of this year when the longest-ever Wimbledon tennis match and World Cup qualifying soccer matches occurred simultaneously.

The traffic peak on Tuesday at about 6 p.m. makes the U.S. midterm congressional election the third most-read-about and most-watched online news event since Akamai started watching these trends in August 2005.

But does that mean Tuesday's election was a bigger deal than the 2008 election that saw the United States elect its first African-American president?

Not exactly, said Liz Bradley, a spokeswoman for the internet monitor.

The numbers may have more to do with the fact that people, in general, are using the internet more to consume news in 2010 than they were in 2008, she said.

"There's two things happening," she said. "There's more people going to the Web, and the websites they're going to -- the news sites -- are offering more, which makes them more appealing to consume news on."

Many news organizations, for example, provided streaming video of their election coverage online. ABC News and Facebook partnered on an online tool that let people watch the election unfold while chatting with online friends.

Still, Bradley said she was surprised at how much the traffic peaked.

Interest in the election appeared to come from outside the United States, too. At 6 p.m. Tuesday, 42 percent of news readers were located outside of North America, according to Akamai.

Social networking sites may have played a role in the election's popularity.

Ahead of the election, there was some speculation that online social media tools -- like Facebook alerts and Foursquare badges -- might stir up interest in the election and could possibly increase voter turnout.

While it is difficult to immediately gauge the scope of the impact, more than 12 million people over the age of 18 posted status updates on Facebook saying they had voted, according to numbers provided by that social networking site.

Those numbers are higher than they were for the 2008 election, when only 5.4 million people posted on Facebook that they had voted.

But usage of Facebook is also up considerably in general. Facebook has a total of more than 500 million members today; in early 2008, the site had only about 100 million users, according to TechCrunch.

More than 50,000 people "checked in" to polling locations on Tuesday and earned digital badges on Foursquare for using that smartphone app to say they'd voted, according to a map compiled by that company.

Foursquare didn't exist in 2008, so no comparison was available.

Facebook issued a press release early Wednesday that raises another interesting question about the internet's influence on elections:

The trend played out on other sites, too.

Twitter also saw an increase in discussion about the election on Tuesday. On Wednesday morning, "Election Results" was among the top topics being discussed on that site.

On Google, "elections" was the top No. 1 "hot topic" Wednesday, with searchers and internet chatter on the subject spiking on Tuesday night and again on Wednesday morning in the United States.

Seventeen of the top 20 search topics on Tuesday on Google were related to the election, according to a Google spokeswoman.

Did you go online to learn about the election? Let us know what you think about the internet's impact on elections in the comments section below.