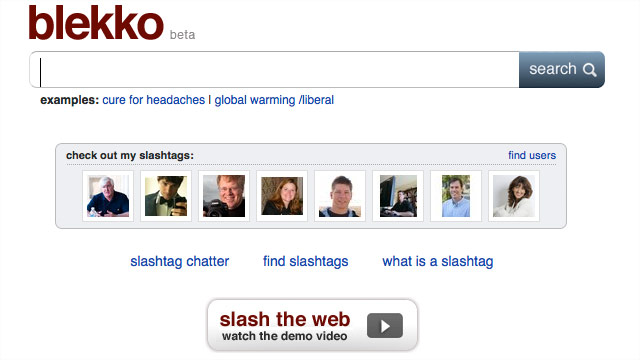 With the official rollout, Blekko is also releasing several new features designed for both mainstream and the site's super users.

As you may recall, Blekko is designed to eliminate spam search results, allowing users to search just a subset of the web through its proprietary slashtag technology.

The most significant upgrade to Blekko's search engine is the addition of slashtags that auto-fire for queries that fall into one seven categories: health, colleges, autos, personal finance, lyrics, recipes and hotels.

Every time a Blekko user's query is determined to be in one of these categories, Blekko will automatically append the associated slashtag to the query and limit results to just the subset of URLs that fall under that slashtag.

The auto-fire functionality is designed with passive searchers in mind, and aims to eliminate friction for first time users. The technology that powers these auto-slashtags was developed through an extensive research and development phase that involved analyzing the relationship between queries and the type of spam results they typically generate.

Blekko plans to introduce auto-slashing for additional categories moving forward, but selected to launch with ones that represent a high volume of search traffic and are typically laden with spammy results.

Health, lyric and financial queries on Google or Bing, for instance, will return results dominated by poor quality content farms or malware-hosting sites.

Those same searches on Blekko yield results only from high quality sites.

Blekko's slashtag formula works because of passionate users who take the time to add and edit URLs for category slashtags. As such, the company has released new features to enable users to apply to be editors for slashtags as well as share their comments and feedback on individual slashtags.

Think of this as the Wikipedia formula but applied to search, so a small percentage of users will work together to build out slashtags for the majority of Blekko searchers.

Blekko has been testing its solution to search with roughly 8,000 beta testers who have created more than 3,000 different slashtags. Blekko tells us that 11 percent of its existing user base come back to the site on a weekly basis.

CEO Rich Skrenta and founder Mike Markson have modest projections for the immediate future, but believe that once the site hits one to two million queries per day, it can be profitable.

Blekko is currently available on the web or as a mobile-optimized site, but mobile applications are also said to be in the works.