Future of Windows Azure -- platform is the service 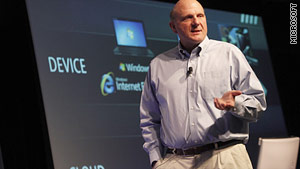 Moving beyond mere Infrastructure-as-a-Service (IaaS), the company is positioning Windows Azure as a Platform-as-a-Service offering: a comprehensive set of development tools, services, and management systems to allow developers to concentrate on creating available, scalable applications.

Over the next 12-18 months, a raft of new functionality will be rolled out to Windows Azure customers. These features will both make it easier to move existing applications into the cloud, and enhance the services available to cloud-hosted applications.

The company believes that putting applications into the cloud will often be a multistage process. Initially, the applications will run unmodified, which will remove patching and maintenance burdens, but not take advantage of any cloud-specific functionality.

Over time, the applications will be updated and modified to start to take advantage of some of the additional capabilities that the Windows Azure platform has to offer.

Later in the year, Microsoft will enable Administrator-level access and Remote Desktop to Windows Azure instances.

For even more compatibility with existing applications, a new Virtual Machine role is being introduced.

This will allow Windows Azure users to upload VHD virtual disks and run these virtual machines in the cloud. In a similar vein, Server Application Virtualization will allow server applications to be deployed to the cloud, without the need either to rewrite them or package them within a VHD. These features will be available in beta by the end of the year.

Microsoft also has a lot to offer for applications that are cloud-aware. Over the past year, SQL Azure, the cloud-based SQL Server version, has moved closer to feature parity with its conventional version: this will continue with the introduction of SQL Azure Reporting, bringing SQL Server's reporting features to the cloud.

New data syncing capabilities will also be introduced, allowing SQL Azure to replicate data with on-premises and mobile applications. Both of these will be available in previews by the end of the year, with final releases in 2011.

A range of new building-block technologies are also being introduced, including a caching component (similar to systems such as memcached) and a message bus (for reliable delivery of messages to and from other applications or mobile devices).

A smaller, cheaper tier of Windows Azure instances is also being introduced, comparable to Amazon's recently-released Micro instances of EC2.

The breadth of services that Microsoft is building for the Windows Azure platform is substantial.

Compared to Amazon's EC2 or Google's AppEngine, Windows Azure is becoming a far more complete platform: while EC2 and AppEngine both offer a few bits and pieces that are comparable (EC2 is particularly strong at hosting existing applications in custom virtual machines, for example), they aren't offering the same cohesive set of services.

Nonetheless, there are still areas that could be improved. The billing system is currently inflexible, and offers no ability for third parties to integrate with the existing Windows Azure billing.

This means that a company wishing to offer its own building blocks for use by Windows Azure applications has to also implement its own monitoring and billing system. Windows Azure also has no built-in facility for automating job management and scaling.

Both of these gaps were pertinent to one of yesterday's demonstrations. Animation studio Pixar has developed a prototype version of its RenderMan rendering engine that works on Windows Azure.

Traditionally, RenderMan was only accessible to the very largest animation studios, as it requires considerable investment in hardware to build render farms.

By moving RenderMan to the cloud, smaller studios can use RenderMan for rendering jobs without having to maintain all those systems. It allows RenderMan to be sold as a service to anyone needing rendering capabilities.

Neither job management -- choosing when to spin up extra instances, when to power them down, how to spread the different frames that need rendering between instances -- nor billing are handled by Windows Azure itself. In both cases, Pixar needed to develop its own facilities.

Microsoft recognizes that these are likely to be useful to a broad range of applications, and as such good candidates for a Microsoft-provided building block. But at the moment, they're not a part of the platform.

Microsoft CEO Steve Ballmer has said that Microsoft is "all in" with the cloud. The company is certainly working hard to make Windows Azure a better platform, and the commitment to the cloud extends beyond the Windows Azure team itself.

The two notable exceptions are Hotmail and Bing, both of which already have their own, custom-built, dedicated server farms.

This internal commitment is no surprise given the history of the platform. Windows Azure was originally devised and developed to be an internal platform for application hosting.

However, before there was any significant amount of internal usage, the company decided to offer it as a service to third parties. Now that the platform has matured, those internal applications are starting to migrate over. As such, this makes Windows Azure, in a sense, the opposite to both EC2 and AppEngine.

Those products were a way for Amazon and Google to monetize their preexisting infrastructure investment investment that had to be made simply to run the companies' day-to-day business.

With the newly announced features, there's no doubt that Windows Azure is shaping up to be a cloud computing platform that is both powerful and flexible. Microsoft is taking the market seriously, and its "all in" position seems to represent a genuine commitment to the cloud.

What remains to be seen is whether this dedication will be matched by traditionally conservative businesses and developers, especially among small and medium enterprises.

A move to the cloud represents a big change in thinking, and the new Windows Azure features will do nothing to assuage widespread fears such as a perceived loss of control.

It is this change in mindset, not any technological issue, that represents the biggest barrier to widespread adoption of Windows Azure, and how Microsoft aims to tackle the problem is not yet clear.