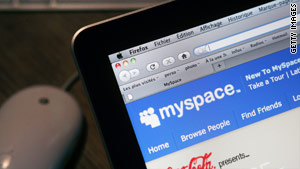 MySpace users have been at risk of having any public info they post released to outside advertisers.
STORY HIGHLIGHTS
RELATED TOPICS

New York (CNN) -- Social networking site MySpace, while acknowledging it shares profile information with advertisers, said Saturday that it is taking action against app developers who may have violated the website's terms of use by sharing user data.

A spokesman for MySpace who refused to be named told CNN that it shares information with advertisers, but that it does not identify a user. Although MySpace users are not required to provide an actual name when registering, their user IDs link the public information displayed on their profile, which can sometimes reveal names, addresses and other critical information.

The company told CNN in a statement that the site shares "non-personally identifiable information with advertising companies as part of our ad serving process."

"It has come to our attention that several third-party app developers may have violated these terms and we are taking appropriate action against those developers," the spokesman said. He said the company prohibits third-party developers from sharing any user data, including a user ID, with other entities.

One of the apps that was in violation of MySpace's user privacy policy was the "Tag Me," application. Upon notification of this violation, the application was briefly suspended from the site, according to MySpace.

MySpace maintains that it collects user information for metrics and analytics purposes and only reveals information that is made public by users on their personal profiles.

Facebook issued a stern warning to independent developers Monday in response to reports that some applications on the site were sharing identifying information about users.

Facebook's leaks were considered more serious because of the number of users and the fact that personal information including names was released to both advertising and data firms. Facebook said it will block the transmission of user IDs.