OK Go: How to make a viral video 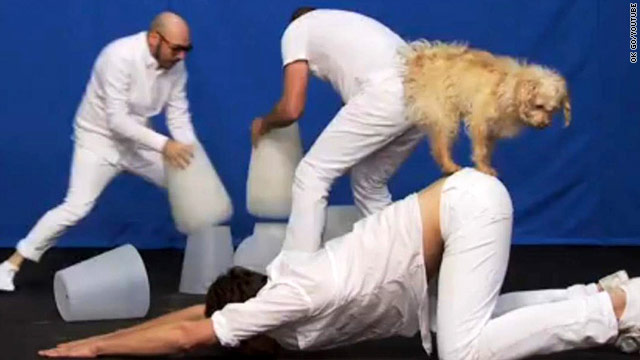 Camden, Maine (CNN) -- How do you make a video -- or, really, any piece of online content -- go viral? It's something on the mind of every backyard YouTube videographer; every pajama blogger; and, ahem, every big news organization working on the internet.

Perhaps the undisputed master of viral Web success is the band OK Go. The indie band, which you won't hear too often on the radio, is huge on the internet.

Another video is due out on November 8. They're working on a new audio album, too, but given their online success that almost seems like an afterthought.

The reason for their online success? According to Ok Go's lead singer Damian Kulash, it's simple.

"Mostly because we're awesome," he said with a laugh.

Content succeeds online, he said, because it brings people joy, it makes them smile -- it's interesting enough to be passed along to friends and family members. That's no stunt, he said, it's just a matter of making something that's genuine and interesting.

Kulash spoke with CNN before a performance at the PopTech conference in Maine, an event dedicated to new ideas in technology and social innovation.

CNN: Why do you think your band has had so much success online, specifically?

Well ... mostly because we're awesome. [laughs] No. The simplest most pat and perhaps most cocky answer I can give you -- but the one I kind of believe -- is that we make cool stuff. There's no amount of savvy or like gaming the system that is going to make people like things that are not likable.

The things we have been most successful with make sense in most systems. We just think they're fun. We didn't really think of our online videos as videos at first. They were just sort of these weird gifts to our fans that we knew we were connected to online. It happened to be at a time when the music industry was crumbling elsewhere and we ended up with these accidental gifts being a major leg in the stool of what we do.

CNN: Can you tell me about your upcoming video?

I can tell you our upcoming video is animations involving food. And it was done in collaboration with some students from MIT and Geoff McFetridge, an amazing animator.

CNN: Do you have any tips for people who might make their own videos online?

Make them embeddable -- duh. Really think about how somebody will react to them. What do you wanna pass to your best friend or your mother or your co-worker? It's joy or wonder or excitement or something that will actually make their day better.

CNN: Where do you get your inspiration?

Yeah. Or Dave Eggers. I get a lot of inspiration from people who manage to communicate real human emotions. Especially writers, because I think the left-brain process of having to make things logical is often totally toxic to the right brain part of actually feeling something. And it's how I've wound up in music. At least logic never gets in the way. The best music has to hit you in the gut, you can't judge it by whether it was a good argument or grammatical in sound. You have to feel that. Obviously there's a lot of musicians that I get inspiration from but I like it when people make things emotional that you didn't think could be -- thank you Ira Glass.

CNN: What role do you see technology having in music going forward? What surprising things should people look out for?

Watch OK Go's Rube Goldberg machine in "This Too Shall Pass"

CNN: What's the most inspiring site on the Web?

DonorsChoose. It's a micro-funding-for-education site. And it raised tens of millions -- it might be in the hundreds of millions -- of dollars for specific projects at schools around the nation and maybe around the world. It's such a simple and genius idea that has actually made peoples' lives better.

CNN: How has the internet changed the way you communicate with your audience?

It's difficult to answer the question because embedded in the question is this idea that the internet is this separate space now. And it's hard for me to see the digital space as a distinct annex of physical space. Everything you will do to make this story will go through a computer.

However, trying to look at it in sort of a more traditional light, it's been completely revolutionary and completely freeing. We never particularly wanted to have our work mediated by anyone else ... The internet has allowed for us to sidestep a lot of those [corporate, radio, TV and record label] agendas by making stuff that we can give directly to people, and by relying on a smaller number of people to care more rather than getting more and more bodies through the line at Wal-Mart.

CNN: What's your favorite moment from one of your videos? It just seems like they would be such fun things to create.

They are really fun. I have almost the same favorite moment from every video, which is going to work on Day 14 or something and being like, 'Holy s---! This is my job? Playing with dogs?' You know? 'Today I'm going to go try to get this spoon to swing around a candle stick, propelled by a rubber band -- and that's my job?' My favorite part is that it's always changing and we are blessed with the opportunity to collaborate with people who are so smart and so creative and so interesting, you know.

CNN: Was there any moment that was particularly difficult to pull off?

In the last scene of the last video, it was getting the dogs to go up the ladder all at the same time. Because these dogs had been trained for months not to pay attention to what the other dogs were doing. So when they're all doing the same thing they start to feel like, 'What?! I'm doing this wrong!'

I think the funniest moment on that video was when I brought my own dog in on the last day of shooting. The night before I had let her off on her leash and she had gone and found a swamp somewhere and came back 20 minutes later smelling like, you know, like 4,000 years of bog. I washed her off like 15 times and got her to the point where it was OK to be in the same room with her, and I was pretty sure she didn't smell anymore.

The next morning I had completely forgotten this event, especially, because I'm not a dog. And I brought her to the set.

The dogs ... they were distracted and not working and everybody was looking around and not paying attention. We couldn't get through even like the first half of the video. And we finally got to the point where my dog, Bunny, came out and we figured out what was going on.

They were all focused on her, like, incredible scent. And they were like running over to her and they would just bury their nose in her butt and be like [intense sniffing noises here]. It was like a drug.