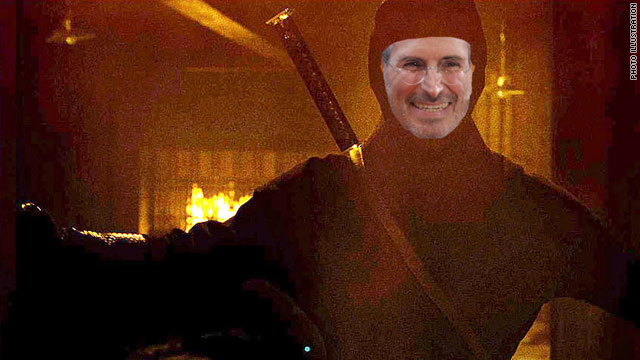 This got us thinking about other tech tales or topics that would make juicy fodder for Hollywood. Studios, take notice -- here are five other tech movies we'd like to see:

Plot: Inspired by Jobs' supposed real-life brush with authorities at an airport in Japan, this surefire blockbuster would blend tech-industry intrigue with sword-wielding, shuriken-throwing, ass-whuppin' action. By day he's the visionary but polarizing leader of a major tech company; by night he's a shadowy martial-arts master who carries out stealth missions against Apple-haters, prying bloggers and Google CEO Eric Schmidt.

Memorable catchphrase: "Your sword -- you're holding it wrong."

Plot: A Boston-area university student creates a website that is used by millions, threatens the status quo, changes the world and is attacked by lawsuits. No, it's not another Facebook movie -- it's a Napster movie. Shawn Fanning's peer-to-peer file-sharing service nearly toppled the music industry and made him a lot of enemies, which sounds like juicy dramatic fodder to us. Soundtrack by Metallica.

Memorable catchphrase: "But Your Honor, in kindergarten they taught me that sharing was a good thing."

Plot: Remember the 1999 made-for-TV movie about the rise of the home computer, starring Noah Wyle of "ER" as Steve Jobs and Anthony Michael Hall from "The Breakfast Club" as Bill Gates? No? Well, me hearties, it's just itchin' for a remake. We see this as a sprawling epic, with updated chapters about Jobs' rebirth at Apple and billionaire Gates giving his fortune away to good causes around the world. And to spice things up, some crazy flashback scenes of late-night coding binges.

Dream casting: Hall and Wyle are too old, so let's go with Daniel Radcliffe (Jobs) and Michael Cera (Gates).

"An Apple Engineer Walks Into a Bar ..."

Plot: This dark ensemble comedy chronicles the hapless Apple staffer who loses a product prototype in a Silicon Valley German beer hall, the opportunistic barfly who sells it to tech blog Gizmodo, and the blog editor who posts the specs of the device online, causing a sensation. Things come to a head when the police, prompted by Apple, raid the editor's house to look for evidence of the source of the leak. In a surprise twist, Apple is revealed to have swiped the prototype from the bar itself and leaked it to build hype for its product. The gambit backfires when said product, an electronic dental "grill" called iTeeth, flops on the market.

Plot: Gotta sing! Gotta dance! Gotta search! The rise of Google is told though song in this toe-tappin' spectacle, which follows co-founders Larry Page and Sergey Brin from their early days at Stanford through the company's IPO and expansion into other web-based and mobile services. Dramatic tension builds in the film's second half as Google stares down China over issues of censorship. Song highlights include "Takin' the Hot Out of Hotmail," "YouTubin'" and the showstopping finale, "Don't Be Evil."

Story pitch: It's "The Social Network" meets "The Producers."

Memorable catchphrase: "Let's all raise a toast to Mail Goggles!"