How to protect your child from online bullies 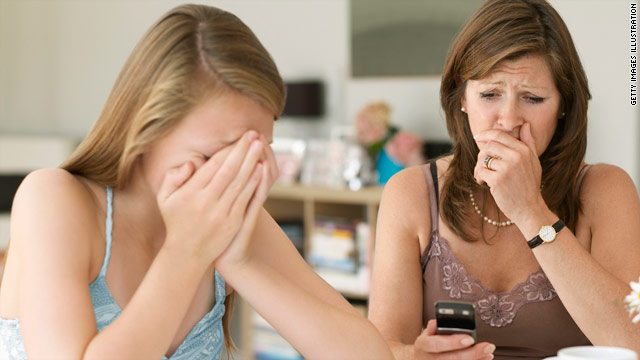 Texting is one of the ways teens and younger kids can be bulied. Parents can help by being quietly engaged.
STORY HIGHLIGHTS
RELATED TOPICS

(CNN) -- As cyber bullying emerges as a nasty and easy supplement to traditional schoolyard taunts, a raft of online tools have come on the market to help parents prevent it or respond to it.

But experts say common sense parenting and simple awareness about the potential for trouble might be some of the most valuable tools to prevent damaging electronic harassment.

The most simple way to start? Get involved in your child's online life. Then stay out of the way.

Michael Fertik is CEO of ReputationDefender, which offers free and paid online tools designed to monitor what's being said about you, or your child, on the Web.

As children are first showing interest in social networking sites like Facebook, parents should ask for their passwords before giving permission, he said.

"It's very much age-dependent," he said. "There's a narrow window of about two years in which most kids are willing to give their parents their passwords. Younger than that they're not really on the social net and older than that they're going to find a way to get it done without sharing a password."

As they move into their early teens, kids are going to balk at password-sharing, he said. So parents should look to become their "friend" on the sites -- then, importantly, stay quiet about it.

Because, honestly, what teen wants mom making a chipper comment about their angst-ridden status update or dad spamming their wall to remind them to take out the trash.

"If parents are letting their kids play on a playground with a bunch of other kids, they aren't going to want their parents right in there playing with them," said Justin Patchin, a criminal justice professor at the University of Wisconsin-Eu Claire and co-director of the Cyberbullying Research Center. "But knowing they're at arm's reach, or watching over them in kind of a hidden way, is not that bad."

In a sad but poignant coincidence, it comes this year as headlines are focused on Tyler Clementi, an 18-year-old Rutgers University freshman who apparently committed suicide after his roommate allegedly broadcast a Web video of him having a same-sex sexual encounter.

Patchin agreed that being engaged with your children is the best bullying prevention.

"I talk to a lot of parents whose kids are on Facebook but they don't know what Facebook is," he said. "They have all these preconceived notions or opinions about Facebook, but they've never been on the site."

In June, Facebook and the PTA teamed up to create what they called a long-term project to teach children, parents and teachers about proper online behavior.

Paid services like ReputationDefender offer tools that scour the Web for references to someone. They market them as ways for parents to keep tabs on what's being said about their children.

AOL offers a similar paid service called SafeSocial that shows parents sites where their child is a member, displays the pictures the child is tagged in and shows who they are friends with online.

GoGoStat and SocialShield are among the other for-profit products on the market.

"Seventy-five percent of the problem is in surfacing the incidents," Fertik said. "When parents are aware of incidents that are affecting their kids, then they often are able to ... talk to the school or talk to the neighbor down the street and solve it."

Patchin said those tools can be helpful when parents are looking to monitor an existing problem. But he said his group doesn't recommend them for parents who just want to keep an eye on their children.

"We don't think it's a good idea for parents to spy on their kids surreptitiously, because eventually they're going to find something they have to confront them about, and it's going to destroy the other lines of communication," he said.

Susan Limber, a professor and bullying researcher at Clemson University, said in a presentation last year that parents and schools need to take time to make it clear that cyber bullying is just as wrong as face-to-face bullying.

Many students who know it's wrong to pick on a classmate in person may not realize that something done online can be just as hurtful, she said in the webcast for the U.S. Department of Health and Human Services.

"What we've learned is that we really need to define cyber bullying as a form of bullying since many of the students in our focus groups did not make that connection initially," she said.

If a child reports being bullied online, the response of many parents is to take away the child's internet access as a way to protect them. This is the wrong approach, Limber said.

"In the children's eyes, this can be seen as punishment, so it's another reason they tell us they don't report it," she said.

Patchin chalks that up to the way many children use computers for games and other recreation. For many of them, anything they do on the computer just doesn't seem as real.

"The nature of technology sort of distances our behavior from the consequences," he said. "We kill people all the time in a game and it's not a big deal.

"But [with cyber bullying] we're messing with real lives."