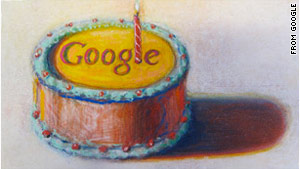 Google celebrated its 12 years Monday with a birthday cake doodle created by Wayne Thiebaud, an American artist famous for his paintings of cakes and pastries.

"Our thanks to Wayne Thiebaud for helping us celebrate our 12th bday with a lovely doodle!" Google tweeted.

It's not clear why Google chooses to celebrate its birthday on September 27 instead of other noteworthy days in its history. Google filed for incorporation in California on September 4, 1998. Co-founders Larry Page and Sergey Brin set up in a Silicon Valley garage and hired their first employee, fellow Stanford grad Craig Silverstein, on September 21 of that year.

Since then, Google has grown rapidly from a search engine into a tech giant that offers a variety of web-based services, from e-mail to calendars to internet phone calling to TV. An increasing number of smartphones run its popular Android operating system.

Google embarks on its last year as a pre-teen by having recently introduced Google Instant, which offers suggested results to users as they type.

"Birthday Google," a trending topic on Twitter, helped spread the word about the search engine's milestone. Some of the most retweeted posts include:

"Happy 12th birthday to Google. Only one year left to use it, dears! When it becomes a teenager, it won't answer anything."

"Happy 12th Birthday Google!!! Thanks for always having what I was searching for ;)"

"Dear Google, I've probably learned more from you than school. So, thank you. Happy Birthday."

So what can we expect next year when Google turns the big 1-3? A bar mitzvah doodle, perhaps.