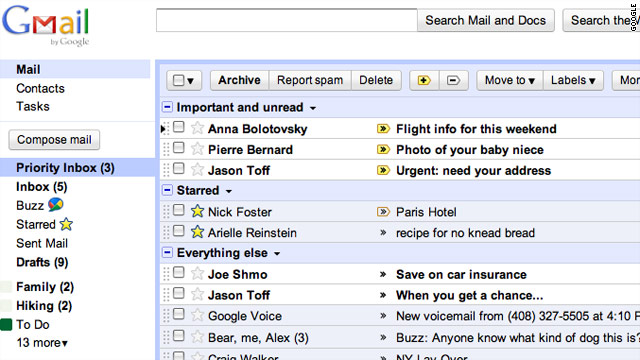 A new Gmail system will consider factors such as the sender's identity and key phrases to create each user's priority list.
STORY HIGHLIGHTS
RELATED TOPICS

(CNN) -- Gmail users who feel swamped by a virtual flood of messages will get some help sorting them out.

Priority Inbox, a feature designed to push a user's most important e-mails to the top of the inbox and leave them there, was scheduled to be rolled out at midnight ET Monday.

"We've been hearing from a lot of our most active users, people around the world, that they're overloaded by e-mail," Gmail product director Keith Coleman said. "They're getting more than they can usually handle with their filters and manual setups.

"We wanted to give you a solution to this."

According to digital researchers the Radicati Group, the typical corporate computer user sends and receives about 110 e-mails every day.

More than 294 billion e-mails are sent every day, according to the group.

Tuesday morning, Gmail users should see a red "New Features" link in their inbox that will let them enable Priority Inbox.

Messages that appear in the priority box will initially be determined by an algorithm based on such as factors as the identity of the sender, key phrases in the message and whether the mail was sent to an individual or a large group.

For example, messages from a spouse or close family member may get ranked ahead of promotional e-mails from a web-based service the Gmail user signed up for.

Coleman said that part of the system is similar to spam filters used by Google and other e-mail providers.

"It used to be people wanted to separate spam from not-spam," he said. "But now, the not-spam is of varying degrees of importance."

Users will then be able to further personalize their priority boxes, removing e-mails that have been automatically pushed there and adding others they'd like to prioritize.

"It will get better just as you use Gmail," Coleman said. "You can help it learn faster."

The reworked inbox is one of several recent tweaks to Gmail.

Last week, Google announced that users would be able to integrate Google Voice into Gmail and make calls directly from their Gmail pages. More than 1 million calls were made using the service in its first day, according to Google.

Also this month, Google extended to 30 seconds the amount of time a user, using Google Labs, has to recall a message that was sent accidentally.