Cartoon avatars are back in vogue 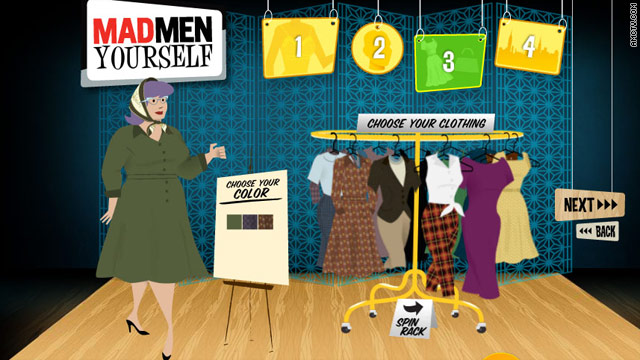 (CNN) -- If recent trends are any indication, cartoon self-caricatures are becoming more popular than the clichéd photo in the mirror headshot. Cartoon avatars, both classic and new, are hot right now.

The cartoon-spawning series "Mad Men" is back. The critically and commercially successful AMC show about 1960s ad execs has revived its popular "Mad Men Yourself" campaign, which lets you create an animated doppelganger that smokes like a train and wouldn't be out of place in a film noir.

Since "Mad Men Yourself" launched a year ago, thousands of people adorned their Facebook profiles with the retro caricatures. The trend was not unlike the personalized knockoffs of Shepard Fairley's striking Obama Hope design during the 2008 presidential election.

The Wall Street Journal, which is mentioned in the "Mad Men" season opener, created an iconic "hedcut" of the show's lead character, Don Draper. In other words, the WSJ made a real hedcut of a fake person on a TV show, just as "Mad Men Yourself" encouraged real people to make fake versions of themselves.

One artist, David Lanham, uses Apple's iPhone 4 video-chat capabilities to create user avatars. For $50, Lanham will do a cartoon portrait of you after chatting with you for about 20 minutes via the phone's FaceTime app.

Lanham is not basing the portraits on photos but on videos -- although he will snap a screen shot of you for reference if he needs it.

Will this cartoon-avatar trend last? Probably not for long, as people may get sick of looking the same as all their Facebook friends. But it may return with the next easily modifiable cartoon-portrait app.

In the meantime, feel free to pre-emptively block the return of the bathroom mirror self-portrait -- there's a Facebook group for it.