From Kolkata to Hollywood, digital film changing landscape of cinema 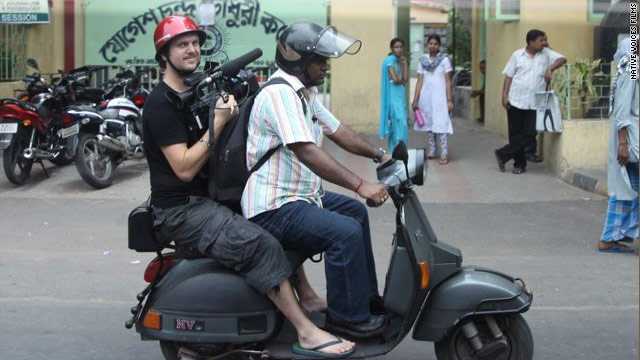 Filmmaker Phil Cox (who shot 'The Bengali Detective' on an HD DSLR camera) believes digital is changing the landscape of film.
STORY HIGHLIGHTS

(CNN) -- From mobile apps for zombie films to web-only prequels for documentaries, digital filmmaking is establishing itself as integral to both Hollywood blockbusters and small indie films.

At the recent Comic-con International iPhone users were encouraged to "shoot" at "Resident Evil: Afterlife" hotspots, but for the developers of the augmented reality app the real target was a nascent audience for the film.

Engaging a niche audience at Comic-Con is like shooting fish in a barrel for savvy marketing executives -- Disney has been tantalizing the audience there with fresh trailers for "Tron" for three years -- but digital marketing and distribution across the movie industry finally seems to have come of age.

Digital marketing and distribution are a factor to think about from the beginning of the process now.
--Phil Cox, Native Voices Films

"They really close the loop," he told CNN.

"[For studios and small filmmakers] I think mobile apps make a lot of sense.

"We only have to build them once but embed 13 languages. So you have an international mobile campaign for a single build. Trying to execute that just a few years ago, the cost and technical difficulties would make it impossible."

Being able to design global campaigns and develop tailored products has really taken off in the past year, according to Yim, whose company worked on last year's Webby-winning online campaign of "District 9" and is partnering with Sony on upcoming big budget Hollywood releases like "Green Hornet".

In part it is because of technological advances, but also the movie industry has embraced the possibilities that digital platforms give them.

"Digital marketing group used to be so low on the totem pole that we would never get the request through because of so many other media outlets. Nowadays we can get content that is quite custom for the audience as they are shooting."

While augmented reality app continue to evolve, social networks remain the simplest and possibly the most effective way for films to reach an audience.

"Facebook and other social networks, they're really enabling connectivity. Once you find one person on Facebook that is interested in your film, you're going to find 50 people, and that connectivity was really hard to find before," said Yim.

Apart from developers like Trigger, independent filmmakers and innovative online and mobile distributors potentially have the most to gain from a more open digital landscape.

"Digital marketing and distribution are a factor to think about from the beginning of the process now," filmmaker Phil Cox of Native Voices Films, told CNN.

"They can have such a huge impact on a project, and the digital possibilities are expanding so fast each year. One often struggles to keep abreast of new initiatives."

Connecting with an audience remains the goal for independent filmmakers and Cox is no different or less effusive in his praise of social digital media.

"Directly reaching an audience is the last great hurdle in indie filmmaking -- and the Internet is the answer. Facebook with half a billion users and the growing use of mobile apps can offer us unparalleled opportunities for people to hear about our films and watch them at a simple finger click."

Cox' latest project is a documentary called "The Bengali Detective" still being shot on location in Kolkata, India.

The way in which it has been filmed, distributed and even financed has been transformed, as Cox has partnered with Babelgum, a free-on-demand digital broadcast network.

"The opportunities it brought us as the producers of an indie film were amazing," said Cox.

"We filmed exclusive web prequels for them as our shoot progressed, but the feature film in the way it was approached or directed was not compromised at all.

"It brought on early finance and assured exposure before the film was finished which would allow us to tempt other investors, distributors and financiers."

Babelgum has used prequels before, most notably for 2009's eco-documentary, "The End of the Line." The company also claims to have been behind the first original feature film to have its premier on a mobile device with filmmaker Sally Potter's "Rage."

As a new kind of digital company, Babelgum has been carving a space for itself in a rapidly changing digital world, finding ways around traditional distribution rights and enabling others at the same time.

"[The filmmakers] are able to eliminate some of the gatekeepers, like traditional distributors," Karol Martesko-Fenster of Babelgum, told CNN. "[Web-only prequels] are not just marketing; it's setting the stage for the film."

The eight specially shot prequels and behind-the-scenes episodes of "The Bengali Detective" are being posted online and have already begun to generate a bit of buzz.

But in the digital age of film, instantly reaching a global audience can have unexpected impacts, as Cox and Martesko-Fenster found out.

"The Bengali Detective" prequels had to be blocked from India after worries from Cox that they may affect the people involved in the on-going triple murder case they were following.

"I couldn't pull the whole page [with the prequels] from the website, but we could geo-block them. That's the interesting thing with the web, we can turn on a dime, and we're learning all the time," said Martesko-Fenster.