Is this guy the Web's new rickroll? 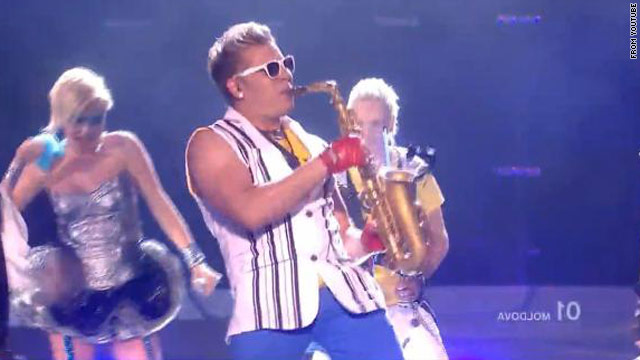 Saxrolling sends you to a video of saxophonist Sergey Stepanov provocatively thrusting his pelvis in an eight-minute loop.
STORY HIGHLIGHTS
RELATED TOPICS

(CNN) -- Have you recently clicked on a link and -- surprise! -- been redirected to a nine-minute YouTube clip of a hip-swiveling saxophone player? Congrats -- you've been "saxrolled" and seen the Epic Sax Guy.

It is a new variant of "rickrolling," and you should be afraid. Very afraid.

Here's some background: After the Moldovian band Sunstroke Project recently performed on TV, some jokester by the name of libb3n edited the video to focus on saxophonist Sergey Stepanov -- who is provocatively thrusting his pelvis while playing -- and uploaded the result on YouTube.

Worse, a few seconds of Stepanov's gyrations are looped over and over for 8 minutes and 53 seconds as the same four-second, saxxy rhythm plays over and over in the background.

The Euro dance-pop itself is strangely hypnotic and, like the infamous earworms in Star Trek's "The Wrath of Khan," will transcend language barriers to bury itself in your brain -- whether you like it or not.

The new meme is an evolution of rickrolling, the 25 million-strong habit of misdirecting people to '80s icon Rick Astley's "Never Gonna Give You Up" music video. Rickrolling started in 2007 as pranksters fooled people into clicking on links to hot topics at the time.

Today, the Epic Sax Guy video has surprised Web users who clicked on links promising a trailer to "The Avengers" or a preview of the iPhone 5.

If you'd like to find the origin of this evil, look no further than Sunstroke Project's song "Run Away" (about 38-40 seconds in), which the band performed at the Eurovision Song Contest 2010 in Oslo, Norway.

Sunstroke Project and Moldova didn't do so well in the contest -- they finished 22nd out of 25 entrants -- but Epic Sax Guy already has a Facebook following of more than 21,000 people.

No doubt Epic Sax Guy's 15 minutes of fame will be up soon. But his four seconds of looped music, and all that hip thrusting, will live on forever in our nightmares.