How Bing is out-innovating Google 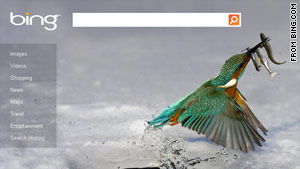 (Business Insider) -- Google is one of the smartest, most innovative companies in the world, but in its core business -- online search -- it's being routinely shown up by Microsoft's third-place search engine, Bing.

Bing is a surprisingly fast-moving, innovative product -- and it's forcing Google to play catch-up time and time again.

Years ago, for example, Google set itself apart from other search engines by focusing on making its homepage load faster than everyone else's, including a very simple design with a white background.

When Bing's look became popular, Google launched a feature to enable its users to make Google look colorful like that, too. For a day, Google even replaced its default background with an image, mimicking Bing's look. Google users were not impressed with the decision, however. They howled, and Google quickly reverted back to the plain white look.

The decision to change its layout and then to undo the change shows that Google is feeling the pressure of Microsoft going hard into the search space.

And this wasn't the first time Google's hand was forced by Microsoft. In October, Microsoft announced at an industry conference that it was integrating Twitter results into Bing. Google was upstaged, since it hadn't announced a Twitter deal yet. The company scrambled to get Twitter integration, which it announced just hours later. The move looked desperate.

When Bing launched, it tried pursuing search from a different angle than Google. Industry observer John Battelle wrote that Microsoft was trying to help "people make decisions in a new way." It was doing this by breaking up search results into categories. Instead of getting just 10 blue links like Google offered, you get subheadings for each result.

So, type in "Friday Night Lights," for instance, and you get "News," general results, videos, then "cast," then "episodes." At first, it's a bit jarring, but it can be useful by breaking up search results into what you need. Just over a year after Bing debuted, Battelle noted that Google was changing its design to follow the search design Bing was using.

For all of Bing's new ideas, it hasn't translated into big gains in users. The latest numbers from comScore show that 63 percent of searches in the U.S. are performed on Google, but just 13 percent are done on Bing.

Thanks to that huge share of search, Google has built a wildly profitable business. Meanwhile, Microsoft is losing billions online, dumping money into Bing and other properties.

So, while Microsoft gets credit for innovating and forcing Google's hand, it's not paying off.

The opinions expressed in this commentary are solely those of Jay Yarow.