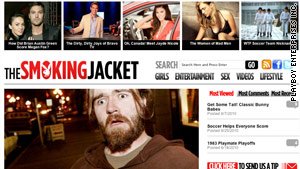 The Smoking Jacket site features stories on STDs, how to have sex at work.
STORY HIGHLIGHTS
RELATED TOPICS

"Cube dwellers and office drones alike shall rejoice at this fun, sexy, satirical antidote to the drudgery of the work day," Playboy editorial director Jimmy Jellinek said in a written statement.

The site, which "provides guys with smart and sexy distractions throughout the day," according to the statement, is geared toward the blogosphere, with short posts and links to viral content from other sites.

Playboy Enterprises did not have immediate numbers on visits to the site, which went live shortly after midnight. But some pages were loading slowly Tuesday, which spokeswoman Theresa Hennessey said was due to heavy traffic.

"It's been pretty phenomenal so far," Hennessey said.

Through its decades of existence, Playboy magazine has staked out different ground from most of its skin-baring competitors, mixing nude photos with lifestyle features, interviews with celebrities and politicians, and short fiction by well-known authors.

Based on its debut content on Tuesday, though, The Smoking Jacket -- despite its lack of nudity -- may be taking a more lowbrow route.

Featured articles included "How to get laid at work," "7 signs that you've given up on getting laid," and "Americans totally dig STD-like sensations."

It provides links to such journalistic efforts as a blog post about stripper cage fighting and another on the 2010 Hooters Bikini Contest in Pelham, Alabama.

The empire's original site, Playboy.com, will continue offering its 6 million monthly visitors "nudity, as well as lifestyle articles that are typically longer, more reverent, and written in a similar style as those appearing in Playboy magazine," the company's statement said.

The new site also featured a short welcome video from Playboy founder Hugh Hefner, dressed, of course, in one of the trademark jackets that inspired the website's name.

"The Smoking Jacket isn't just something I like to wear around the mansion. It's Playboy's new safe-for-work website," he says. "Next to the mansion, it's the best hangout on the planet."

The new site rolls out as traditional adult-entertainment outlets like Playboy struggle to keep up in an online world where free pictures of nude people are just a mouse-click away.

Playboy Enterprises reported a net loss of nearly $1 million in the first quarter of this year -- actually better than what was predicted.

The company reported a loss of $13.7 million during the same quarter last year.

"We believe that 2010 will be a transitional year and that the true benefits of our strategy will be more fully evident next year," Playboy CEO Scott Flanders said in a statement earlier this year.

The rollout also comes days after the owners of rival Penthouse announced they would like to buy out Playboy, and Hefner himself publicly mulled buying outstanding shares of the company and taking it private.