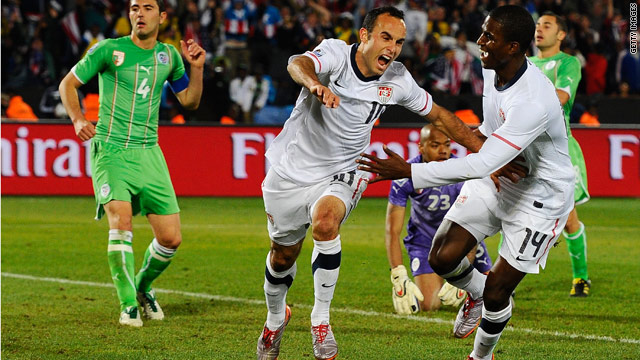 (Mashable) -- The dramatic ending to the World Cup match between the U.S. and Algeria on Wednesday could set a new record for internet traffic.

We've been watching Akamai's Net Usage Index, which tracks visitors per minute on the company's vast network of websites. In the minutes following Landon Donovan's game winning goal in the 91st minute of action (which sent the US to the round of 16), traffic spiked to 11.2 million visitors per minute, which move the event past the 2008 presidential election as the second highest traffic day of all-time.

Wednesday's number was also likely pushed significantly higher because England and Slovenia were also playing a suspenseful World Cup match at the same time. The plethora of World Cup breaking news briefly knocked Yahoo Sports offline and also caused issues at Twitter -- though the latter has been somewhat of a regular occurrence during the World Cup.

On a related note, tweets containing "USA" spiked to 6% of total tweet volume.

The overall traffic record was set earlier this month during the first day of World Cup action, where traffic exceeded 12 million visitors per minute. We'll wait and see what the final numbers are from Akamai, but for the moment, it looks like Donovan's goal will go down in Internet history at least as a solid No. 2.