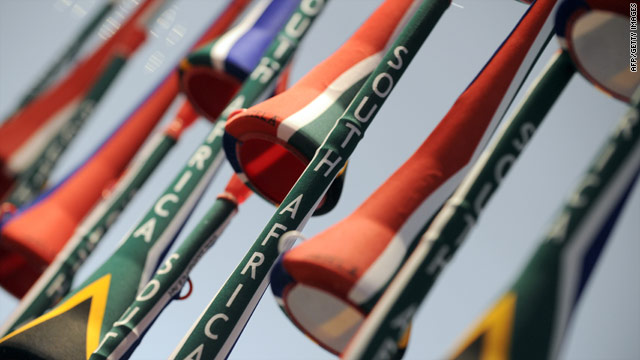 (CNN) -- The droning honk of the vuvuzela has become the real star of the World Cup -- the kind of star some soccer fans love and others hate.

Now, the wired world has joined the chorus.

On Friday morning, there were roughly 30 vuvuzela-themed smartphone apps for the open-source Android platform. Another dozen or so were in the Apple's App Store, which sells apps for the iPhone and iPad. Most of these apps turn phones into digital vuvuzelas. At the push of a button, they emit a constant squawk, just like the real horns.

One app, called Vuvuzela 2010, elicited a number of comments:

"I woke the wife with it and lost a tooth!"

"My brother is totally anti Vuvuzela! Wonderful, I go on all night."

During every World Cup match, thousands of fans, seemingly with lungs like bellows, honk the buzzing horns from start to finish, a nod to South African culture but one that has led some players to complain about being distracted.

On Twitter, the World Cup wasn't just overloading the site with soccer tweets from around the globe. An account called the_vuvuzela mimics the horn fairly accurately in its text posts -- which is to say, the posts are droning and never-ending. The announcement of Friday's 2-2 tie between the United States and Slovenia, for example, went like this:

A YouTube video starting to make the rounds Friday inserts the horn into a mashup of clips that includes classics such as Dramatic Chipmunk and the sneezing baby panda. Other internet users created fake sheet music for vuvuzela songs (it's all whole notes) and made up a cover for the apparently fake video game called "Vuvuzela Hero," a mock of the "Guitar Hero" franchise.

Of course, by Friday, the online vuvuzela backlash also had begun.

The Onion weighed in with an article under the headline, "South African Vuvuzela Philharmonic Angered By Soccer Games Breaking Out During Concerts."

"I cannot imagine what is getting into these football teams that they would suddenly begin full-scale international competition just when we are beginning our 2010 concert series," a fictional concert director says in the spoof story.

One of those Android apps has a not-so-supportive name -- "Screw Vuvuzela."