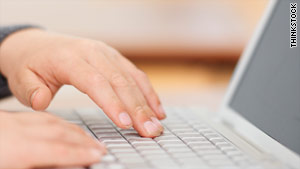 Experts predict we'll be working primarily through web-based and mobile apps in the near future.
STORY HIGHLIGHTS
RELATED TOPICS

(Mashable) -- In a recent survey of around 900 Internet and tech experts and social analysts, Elon University researchers found that most of their respondents said Internet users will "live mostly in the cloud" by 2020.

These experts, or a full 71 percent of them, at least, predict we'll be working primarily through web-based and mobile apps, such as Facebook and Google Docs, and less on software installed on our own desktops.

This group isn't forecasting the death of the desktop altogether, though -- at least, not just yet. According to this study, the majority of respondents think that in the future, we'll use a hybrid of cloud and desktop computing, with web-based programs continuing to grow in their scope and role.

This question about cloud-based applications was raised as part of a 10-question survey conducted jointly with the Pew Research Center. The statement that leads us to this 71percent figure of majority agreement reads thus:

The advantage of instant access to information regardless of device, operating system or location is a huge factor in the dominance of web apps over desktop apps. "The cloud" is accessible from work, from home, from any location with an Internet connection, and increasingly, from our ever-smarter mobile devices.

Who wouldn't find that kind of postmodern fluidity appealing? We're no longer tied to offices for work, nor are our social activities locked away at home.

Yet some of the same experts in this mega-panel disagreed, mainly on grounds of security and privacy.

"Trust not the cloud for reliability, security, privacy," said respondent Barry Wellman, a professor of sociology and Netlab director at the University of Toronto. Another enterprise blogger predicted a "huge blow-up with terrorism in the cloud... People will lose confidence as cyber attacks cripple major systems."

Craig Partridge, chief scientist at BBN Technologies, noted, "I think a big issue will be information privacy. How do you really control access to your valuable data if it is in the cloud? How do you retrieve your prized novel or your business records if the cloud fails?"

What's your take on this issue? Do you fall into the group more concerned with security and privacy, more wary than enthusiastic about the potential benefits and likely pitfalls of an overly eager approach to cloud computing?

Or are you a seasoned netizen who welcomes the new fluidity that web and mobile applications are bringing to our lives and work? Let us know your thoughts in the comments.